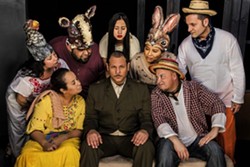 As Ebenezer Scrooge once learned, a guy can get some nasty nightmares resulting from a bad bit of meat or, you know, a rotting morality.

In Labio de Liebre, produced by Teatro Publico de Cleveland (TPC) under the auspices of Cleveland Public Theatre, an ex-military man experiences some darkly humorous interactions with ghosts who just won’t leave. This intriguing play is delivered in the original Spanish as written by playwright Fabio Rubiano Orjuela, with supertitles in English projected on a screen.

As seen at this preview performance, the troupe of local TPC actors under the direction of Dante Fernando Larzabal attack the material with energy and enthusiasm. And although nuance and subtlety are not the production’s long suits, this 90-minute piece eventually makes a powerful statement about tragedies that have befallen many people.

The genesis of the play has its roots in various military operations that have occurred in Colombia over time. And the central character here, a man named Salvo, was a member of the military that often killed indiscriminately. The play is set years later in his comfortable house, where a man with a cleft lip shows up and begins talking obliquely about his physical deformity and other things.

Soon, his brother wanders in, along with his sister and their mother, arriving through various means including out of the fridge. Not only that, a chicken (Lilly Corona-Moreno), a rabbit (Magdalena Godinez Rios) and a cow (Luis Ramirez-Alonzo) also make appearances, sometimes peering through the windows and sometimes traipsing inside the house.

Clearly Salvo’s existence, whether he’s asleep or awake, has been permeated by these people and creatures. And as the reason for their appearance becomes clear, the often-amusing play takes on a decidedly darker patina. Larzabal’s inventive production utilizes singing, dancing and a reporter and ex-beauty queen Roxi (a feisty Alisha Caraballo) to advance the story.

Since some of the dialog is rapid-fire, it’s at times difficult to keep up by reading the supertitles, since they do not indicate the name of the speaker. Of course, maybe I wouldn’t have had this problem if I had made a better decision in high school and taken Spanish classes instead of French. Sacrebleu!

As Salvo, Kivin Bauzo evinces strong stage presence, and he is matched by Christina Patterson who plays the mother of the visiting family. The two brothers are played by Alexander Corona and Ernesto Luna Carmargo with impish whimsy. Indeed, it is their comical aura that sets up the powerful contrast with the serious history the play reveals. In the role of Mala, a young girl with mother problems, Nathalie Bermudez is properly flirty and scatterbrained.

In other words, they’re a family. And once you discover what’s happened to them, the ghosts of the past will be in your head too.