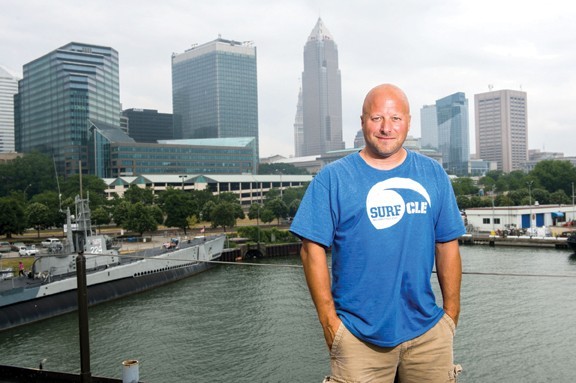 John Stahl, owner and co-founder of the Erie-bobbing software company LeanDog, made a presentation to the Cleveland Planning Commission last week, re-introducing his infamous “Skylift” proposal.

Stahl told Scene last year that he was “fine-tuning” his project, a shoreline cable-car transit pipe dream that emerged a few years back as a one of several wacky hot-button Cleveland development ideas that, at least once, was alleged to be “financially viable.” Stahl told the Planning Commission Friday that he’s invested years of work and hundreds of thousands of dollars in the early conceptual work.

Despite tweaks, the Skylift remains a novelty project that would put ski-lift-style cable cars on the shores of Lake Erie. In its current conception, the route would feature nine stations stretching from Edgewater Park on the west side to the E. 9th Street pier on the east. Stahl said that he envisioned naming rights being a large part of the project’s fundraising and ballparked baseline fares at about $2.50 per ride. According to the PD’s Steve Litt, Stahl is not seeking public subsidies, though he will need “long-term leases from public entities to make the project work.”

Despite a “polite” response from the planning commission, the project has reached something of an impasse. According to the Plain Dealer’s account of the meeting, Stahl reportedly needs $700,000 for a “feasibility study” — perhaps Stahl ought to commission an additional feasibility study to determine the feasibility of the feasibility study — but can’t secure funding until he gets some form of go-ahead from the city. Mayor Frank Jackson and Planning Director Fred Collier won’t give any sort of green light until they see more details:

“The kind that would be described in Stahl’s feasibility analysis,” wrote Litt.

The response to Stahl’s project has been overwhelmingly negative, if not outright derisive. Many consider the project a stupid and inefficient fantasy. Others are concerned about its year-round appeal. For others, safety is the primary concern. (Stahl has said that the Skylift would be built for Alpine conditions, operable in winds up to 60 mph.)

But in the face of devastating budget and service cuts to RTA, it’s easy to understand why conversations about an enormously expensive, imaginary aerial tram may seem insulting or sad to those who can’t even count on frequent, safe, regular bus service.