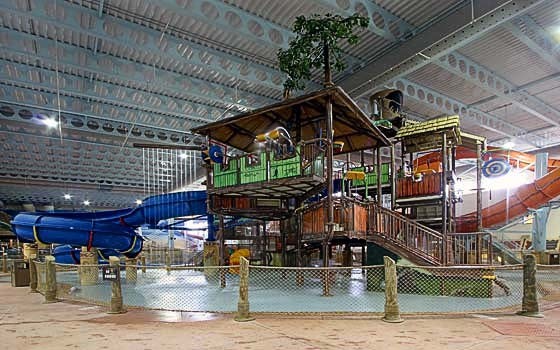 One fell and the other jumped, but Tuesday morning, two men in Ohio died after plunges from balconies.

A 25-year-old man from Virginia died after falling from his room's balcony at Kalahari resort in Sandusky.

The man, later identified by the Erie County Coroner as Derek Vancleave, had a "history of traumatic brain injury."

Vancleave's parents said in an incident report, as reported by WKYC, that he'd been struck by a truck when he was 14 years old and has required "full-time care" ever since.

The father felt "it was possible Derek had gone out on the balcony to escape the smell of food his brother had burned in the microwave."

"We are deeply saddened by this morning’s events. We are fully cooperating with the local authorities for anything they may need. As this incident resulted from a personal and private matter in a guest room, we will not be commenting further. Our thoughts and prayers are those affected."

The Kalahari balcony incident came as shocking reports of another balcony death emerged from Youngstown. There, at the Mahoning County Courthouse, a defendant on trial for a triple murder leaped to his death from the fourth floor.

Robert Seman was accused of setting fire to a Youngstown home in March of 2015, killing 10-year-old Corinne Gump and her grandparents, Bill and Judy Schmidt. According to prosecutors, Seman set fire to the house because Gump was planning to testify against him in a rape case. He would have faced the death penalty if convicted.

A reporter for the Youngstown Vindicator witnessed the 50-foot leap. The impact of the fall on the first-floor rotunda was said to have shaken the building.