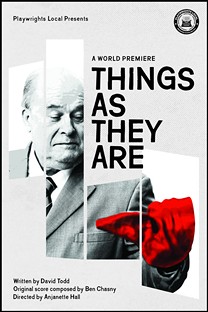 Next month, Playwrights Local, the arts group responsible for organizing the Annual Cleveland Playwrights Festival, will premiere Things As They Are, a new “play-with-music” about the life and work of American poet Wallace Stevens.

David Todd, Artistic Director of Playwrights Local, wrote the play. The production will use selections from Stevens’ poetry and prose, aiming to explore the mystical persona that surrounds the titular artist.

“Wallace Stevens is widely considered to be among the most significant of American poets, as well as an enigma that so many people have enjoyed trying to crack,” says Todd in the press release. “His work is complex but also comic; his language is esoteric but lush and romantic. It’s an honor to be entrusted with the rights to his original material for this production.”

Things As They Are is directed by Anjanette Hall, an Assistant Professor of Theater at Baldwin Wallace. She has been involved in numerous local theater productions as a director and occasionally as an actor. Ben Chasny of the indie rock group Six Organs of Admittance composed the original score for the play. He'll perform the music during the plays with local musician John Elliott, former member of the terrific indie rock act Emeralds and recipient of the 2016 Cleveland Arts Prize.

“It’s also a thrill to work with director Anjanette Hall, who directed a wonderful production of Charles Mee’s Big Love last year and who’s put together an amazing company for this show,” says Todd. “And of course the same goes for Ben Chasny, who has to be one of the most searching and creatively ambitious musicians of our time. We’re all excited to have him here for this entire run, and to perform with such an accomplished counterpart as Cleveland’s own John Elliott.”

The production will be held in the upstairs loft at Reinberger Auditorium (5209 Detroit Ave.). Tickets are $18 for adults, $15 for seniors and groups, and $12 for students.

Arts District Things As They Are Playwrights Local