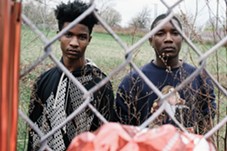 The whiteboard is marked up with Instagram handles and logistical information. There’s a palpable potential energy in it all.

Less than a year since being founded by 28-year-old law student and artist Amanda King, Shooting Without Bullets has developed a dedicated core of teens telling their stories through art. At 6 p.m. tomorrow at Cleveland Institute of Art’s Peter B. Lewis Theater, their stories will be showcased in Under Exposed, a documentary film.

King began Shooting Without Bullets as a response to the tumultuous local socio-political climate kickstarted by the death of Tamir Rice in the fall of 2014. After she was named to the ensuing Cleveland Community Police Commission and serving on it for a year, King realized that it still fell short in communicating with portions of the population it was created to serve.

“The way it was structured – very meeting-oriented, very recommendation-oriented – wasn’t conducive to interactions with teenagers in particular,” she says.

This notion of invisibility and disconnection is echoed by the young people involved in the program.

“Some people acknowledge us, but for others it’s in one ear and out the other,” 16-year-old photographer Leilani Williams, a student at John Hay’s Cleveland School of Architecture and Design, comments. “Especially as black youth, we get pushed off so easily.”

“People shake us off like we’re not there or only acknowledge us for the bad things,” reiterates 20-year-old Charles Mosley, also a student at CSAD.

As King formulated her approach, she sought a way to center teens and give them a strong voice in the community dialogue. Remembering her own reliance on photography as a creative outlet during her teenage years, King, whose undergraduate degree is in Art History, developed Shooting Without Bullets. The program’s basic concept revolved around providing black youth with 35mm film cameras to tell their stories, their way.

“In our society, images move people to social change," she says. "Policies are important, but policies don’t make you feel a connection to another person. Imagery humanizes things. Shooting Without Bullets opens eyes.”

The images captured by the organization’s participants give a visceral, human face to the people behind the policies. “You see the more nuanced experience of being a black youth in Cleveland,” King states as she describes an experience that can be full of “neglect, isolation, being overlooked.”

The group has exhibited at the East Cleveland Public Library, the SPACES Gallery and the Old Stone Church. They’ve been featured in performances at MOCA and Bop Stop at the Music Settlement.

The program now includes a wide range of expressives forms – music, collage, painting – all centering around bringing awareness to the issues faced and, King suggests, transcended by the young people she works with. She focuses her artistic direction on experimentation and non-censorship.

“In other programs I’ve done, they wanted us to capture something that wasn’t us,” notes Mosley, “I wasn’t being me. We never went into our neighborhoods to capture pictures. Shooting Without Bullets made me more free. I wasn’t here photographing the next wannabe model; I’m photographing what is actually going on in the world. It gives me a way to express my feelings instead of capturing what other people want me to.”

“We tell the real,” comments Maurice Philpott, Jr., a 17-year-old student at MC2 STEM who raps as Los P, “We show the real.”

The documentary follows ten of the young artists involved in this program and their process of self-discovery, art-making, and advocacy in Cleveland. It gives insight into their struggle with various forms of institutionalized oppression and violence, but also how they work to overcome it through art. “This film shows that community is so important to the development of teenagers, and you see these ten young artists as a microcosm of the larger community,” King says. “It’s not a traditional doc; it’s fast, moving.”

The film was created over the past three months in partnership with advanced seminar film students Noelle Richard and Dagen Shellenberger from CIA. Their instructor, Jacob Koestler, pitched the collaboration to King after seeing an exhibition. She hopes to take the documentary on the road this summer and expand the program both in Cleveland and beyond.

In the meantime, this collective of collaborative young artists have experience unexpected benefits from this community and network, ranging from the pragmatic to the abstract: 17-year-old photographer and School of the Arts student Lai Lai Bonner has multiplied her portfolio, made industry connections, and reaffirmed her impulse to pursue professional photography, while Williams notes that her participation makes her feel more compelled to speak up about injustices she experiences.

“I’ve developed as both an artist and a thinker,” adds James Banks, a 16-year-old rapper from CSAD, and, reflecting further, said, “This is the power of youth.” A chorus of affirmative murmurs from the gregarious, creative teens echoed around the room, and it’s hard not to agree with his assessment.

Reservations for the screening can be made at ShootingWithoutBullets.org.