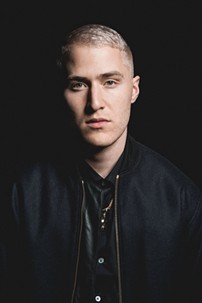 When singer-songwriter-producer Mike Posner retires, he can truly say that, like the Sinatra song, he did it his way. The fiercely creative Posner refuses to be pigeonholed. As he puts it, “If my last album was white, my next album will be black and vice versa.”

Posner, who grew up in the Detroit suburb of Southfield where he says “played a lot of basketball outside and rode a lot of bikes,” had a massive hit last year with the RIAA multi-platinum global tune “I Took a Pill In Ibiza (Seeb Remix),” a song that pairs soulful vocals with percolating synthesizers.

A single from At Night, Alone, the song surpassed 1 billion worldwide streams and became one of the most streamed song of 2016.

Posner says outlaw country artists such as Willie Nelson and Merle Haggard provided the inspiration for the song — the original version of the tune has a country/Dylan-esque feel to it.

“I like the lyrics,” he says in a recent phone interview when asked about how Nelson and Haggard influenced his approach. He performs at 8 p.m. on Monday at House of Blues. “For me, even though it’s older than hip-hop, it’s reminiscent of hip-hop. It reminded me of the music I grew up listening to. Instead of the singers recounting stories of turmoil in the inner city, they recount stories about their struggles with fame and trying to fit in with the path that their parents have laid out for them. I identified with the stories a little more but maybe not so much with the sound.”

He also identifies with their status as “outlaws” who don’t adhere to commercial country conventions.

“That’s an artist’s job,” he says. “It’s to look at the same things that everyone else does and see them in a different way. Why do some artists paint pictures of apples? We’ve all seen apples, but they see the divine in normalcy. My job is to be different and on the fringes of society and see the same things but see them in a different way and not be greedy about what I see. I want to share it.”

Most of the songs on At Night, Alone take an autobiographical approach. In the ballad “Buried in Detroit,” he even contemplates his death.

“I just had a feeling,” Posner says when asked about why he decided to write songs about his life. “You can’t really rationalize my direction taking in art. You can but you’re either making it up or you’re talking about making bad art or something that’s not really art. If I sat back and strategically thought about what direction to go in, that’s going to result in commercial art. That’s the definition of commercial art. That’s art done for the wrong reason. I was just trying to make the record that I liked. That’s all I do. I have songs that pop into my head. I just try to get them recorded the way they sound in my head. That’s really my only goal.”

“It was a blast,” he says when asked about what it was like to assemble the collection of poems. “I feel like the art comes from the same reservoir but you turn on different faucets, like hot water and cold water. I had so much fun making it with Mod Sun and Eric Gorvin, and we did the illustrations together and sat down and put J Dilla and made art. It was so much fun.”