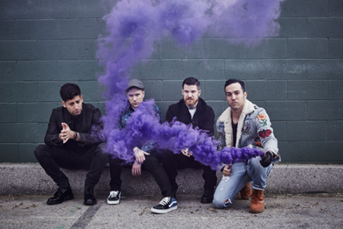 Earlier today, emo rockers Fall Out Boy dropped the new song “Young and Menace,” the first single from their forthcoming studio album, M A N I A. The group also released the song’s music video.

“There’s a lyric in the song, ‘trying to send the world a message, I was young and a menace,’ that reminded me of growing up in the suburbs of Chicago. I didn't look like anyone there or feel like anyone – I felt like an outsider in my own town. It wasn't until I discovered punk rock and that community that I realized I did fit in somewhere in this world — with the other people who didn't fit in,” says Fall Out Boy bassist and lyricist Pete Wentz in a press release. “It’s hard to rationalize rage — it’s hard to quantify anxiety... this song does neither, it embraces the wave...”

The band will embark on a 20-city North American fall arena tour in support of the album. The jaunt kicks off on Oct. 20 in Cleveland with a show at the Q.

Pre-sale tickets will be available beginning on Monday. Tickets go on sale to the general public at 10 a.m. on Friday, May 5.

In addition, $1 of every ticket of the tour will go towards the band’s newly launched Fall Out Boy Fund which will support a number of charities in the Chicago area. For more information, visit falloutboy.com/tour.