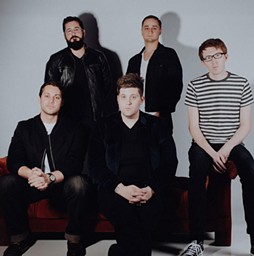 They had a good run with the Royaltons, which played around town from 2007 to 2010. But they've had an even better run with Ottawa, which has built a bigger local following and produced more material.

“When you’re 20 years old, you don’t realize the work part of it,” says DeLong one recent evening while sitting on the patio at Platform Brewery in Ohio City. The group celebrates the release of its new EP, Small Talk, at 8:30 p.m. on Saturday, May 6, at the Beachland Ballroom. “You think you’ll write great songs and get famous. When we started Ottawa, we didn’t want anyone involved who was even partying hard. In Cleveland, we have to work extra hard. There’s no industry. No one will come see us and pluck us up. We started Ottawa with a mission of going really hard. Prior to this, we didn’t realize the work and now we’ve made all the mistakes that an early twenties band makes and we’re trying not to do those same things.”

The 2014 EP Random Lights offers a nice distillation of the band’s influence. "The Good Kind" has a bit of Black Keys-inspired garage blues and a real swagger to it as a beefy bass riff propels the track. "Lie to Me" starts slow and builds in intensity as DeLong sings, "I'm giving up on getting old." DeLong practically dismisses the EP as a “first try,” but the album includes some sharp songs.

The band followed it up in 2015 with the single “Roman Candle” and then started writing songs for Small Talk, another terrific collection of tunes with Strokes-like swagger. The disc begins with the undulating “Fever,” a song that builds in tempo as DeLong muses, “I buried my heart into the desert/I’m digging my face out of my hands.”

"Give It All” features a wailing mid-song guitar solo and soulful vocals while “Rockefeller” and “Britton Hall” both feature dueling guitars. The power ballad “The Worst Way” features an even heavier guitar riff. The band recently signed a licensing deal with Cadence Music Group, a company that handles acts such as Alabama Shakes and Radiohead.

Here’s DeLong’s take on each track on the new EP.

Will wrote this guitar part, and I immediately sang the opening lyrics. It actually took a long time to get the chorus right. The verses were always there, but there are pauses in the chorus that make song. It wasn’t until we tracked the song that they came about. [Producer] Jim Stewart and [producer] Jim Wirt, who happened to be in the room, said the chorus didn’t sound right. We got pissed off. Typically, we’re open for suggestion, but we didn’t know what was wrong with it. I had the title “you’re a fever breaks,” and I thought that would be a great title. We were tracking other stuff and trying to figure out the chorus, and we thought about doing a pause and that worked. Now, it has an anthemic vibe. Jeremy [Barnes] can’t help but slam his bass down every time we play it.

It’s about how I would date somebody and go “next, next, next” and not in any mean way. It’s about at what point, you go, “You’re the one,” whether it’s a job or marriage. Sometimes, you have to let your guard down with whatever you’re doing. The opening line is “Tell me your secret but we both know you’re not going to keep it.” There was a situation where someone said, “You’re the worst at keeping secrets.” I thought that was a cool idea. The song just happened. We didn’t have a chorus but Will wanted to use the melody and I was sitting with my guitar and sang, “Give it all” in real time.

I thought it was a fucking awesome word. Reference to John D. Rockefeller. It’s about thinking about the legacy, not for me in particular, but the chorus goes, “Rockefeller you’re invited to the kingdom.” I was thinking about these super-duper famous families in heaven or in the afterlife being puppet masters. I was thinking about them being puppet masters and my particular legacy with the band or whatever it is. Do we have what it takes for me to make it and for my family to be proud of me when I die.” The beginning of the song is “What will they say when you’re gone.” I started thinking about whether I’m a jerk or too nice or if I care too much about music.

I love this song. It kills live. It’s another song where I was thinking about the girl I dated in high school. She’s married now. It wasn’t that I treated her poorly, but it’s like a girl in a small town who says, “I don’t need you. I’m going to be a famous actress” but then comes crawling back. That’s the motif for that song lyrically. Will wrote the riff in the beginning. The bluesy thing just kind of happened. I really like that song. I feel like it could be a big song but we probably need to make it a minute shorter.

The title of Britton Hall is the name of this classroom at my high school. It was stored in one of our phones as that for a while. We decided to keep the name because we thought it was cool. I think I wrote that guitar riff. I was thinking about how Chris Martin and Gwenyth Paltrow end up with each other. It seems staged or something and that’s what the song is about lyrically. It’s about how can you have all this attention and be comfortable.