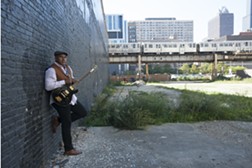 Blossom Music Center was the place to be on August 11, 1993. That was the day that legendary bluesman B.B. King brought his inaugural Blues Festival through town with a stunning lineup.

The bill that day featured King and a dizzying collective of his blues contemporaries, including Buddy Guy, Junior Wells, Koko Taylor, Eric Johnson, and the father/son team of Lonnie and Ronnie Brooks.

By the time that King took the stage at the end of the night, it had been an amazing afternoon and evening of straight up blues education.

For Ronnie Baker Brooks, the experiences he had on that tour remain ones that he’ll never forget.

“It was amazing. Every night, it was like we were the happening thing in that town wherever we played that night,” he recalls. “We were pulling in, and you can hear it on the radio. B.B. King or whatever, Buddy Guy and we’d go to the after parties. Those were packed. It was just an amazing tour.”

As a developing player, Brooks says that his time on the road with his Blues Festival comrades was invaluable.

“You know at that time, it was like college. I got to see the best do it every night. Every night,” he says. “And B.B. King pulled me to the side one night we were in Miami and he said, ‘Son I see you've been watching me every night. I wish they had something like this when I was your age you know.’ He said, ‘But learn everything you can from all of us. Learn everything you can. And I want you to know that your father is just as good as I am or better. We just got different styles.’ And man you know how inspiring that was? I mean, because he knew how much I loved my father. But he saw how much I admired him as well. He just put it all together for me, man. That tour, I was so grateful to be a part of that. So grateful. It was one of the best tours of my life.”

Lonnie Brooks passed away at the beginning of April at the age of 83, not long after we had spoken with Ronnie and in a video message posted on his Facebook page, he remembered his dad, who seemed to know that his time was drawing to a close, and he offered advice to his son with regard to concerts that he had scheduled that week.

“I had a conversation with my dad. He told me, ‘We got to keep going.’ So that's what I'm going to do. I think that music is a healer. It helps you get through times like this,” he said in the message. “That's what I'm going to do and that's what I want you to do. Play his music, enjoy his work. Because he did it from the heart. He loved his fans, he loved his family and he had a hell of a career and he raised his family. What more can you say about that alone? I'm grateful and thankful for him being in my life.”

He released Times Have Changed, his latest solo record, and his first in a decade, in January. Brooks first began working on songs in 2010 and got a significant boost when he connected with producer/drummer Steve Jordan, who brought important guidance to the project.

“I met Steve, we lined up to work together and it came true,” he says. “Once we got with Steve, it kind of went from zero to one hundred! But then it slowed down because he was so busy. He was working with Clapton and with Keith Richards and so on. It took a while. But I’m happy, and I’m very proud of this record. I’m so blessed to have the great musicians on this record and the great special guests.”

Even though there were delays, Brooks says that once they finally got into the studio, they knocked things out for the record quickly.

“The first part of the sessions were recorded in Memphis at Royal Studios, and we were down there about a week. and I think we knocked out about six songs or more — finished and really done,” he says. “Then, we took a break, and we went back down to Nashville at Blackbird Studios and we did another six songs. We took another break and then I had to come back to New York and finish some overdubs and we finally finished the record.”

He admits that working with Jordan was something he initially found to be a little bit daunting, but the longtime producer helped ease his nerves quickly and encouraged Brooks to pursue recording a mix of his own material and a carefully chosen selection of covers. But he also was able to convince Brooks to let his guard down and embrace the talent and extra help that was in the room.

“I was a little intimidated at first. Because it was like, ‘Man, this is Steve Jordan,’ because of his talent and his body of work. He pulled me to the side when we got to Memphis and he said, ‘Look, I know you’re used to doing all of the different jobs that you did on your other records,’” he remembers. “You know, I would arrange the songs, I would write the songs, I would co-produce the songs. I had to tell everybody what to play. He said, ‘Look at the talent around this room. We’ve got your back.’ When he said that to me, it just made me feel so comfortable. It was just like, ‘Okay, let me just get in there and do my thing and lay in this.’ That’s when I kind of knocked off the intimidation factor and just got into the music. It was a great time, and I was honored to have that opportunity.”

In Memphis, Brooks recorded at Royal Studios. An amazing stable of musicians, including legendary guitarist Steve Cropper, jazz saxophonist Lannie McMillan and R&B vocalist Angie Stone, surrounded him. The house band of brothers, guitarist Teenie Hodges, organ player Charles Hodges and bassist Leroy Hodges, along with rhythm guitarist Michael Toles, bassist Willie Weeks and Jordan on drums, completed the core group that worked on the Memphis sessions. The first two tracks that they laid down were covers of Curtis Mayfield’s “Give Me Your Love,” featuring additional vocals from Stone, and a version of the Alvin Cash instrumental “Twine Time.”

“I knew Alvin Cash. He would come through here and he knew my father very well,” says Brooks. “We got into [recording] it and Michael Toles, the rhythm guitar player, was tuning up. Me, Willie Weeks, Steve and Charles Hodges just started grooving. Steve thought it was Michael Toles playing rhythm and it was me. He said, ‘Keep that going, Michael, I like that!’ Michael’s like, ‘No, that’s not me — I’m tuning up! That’s Ronnie.’ He got up off his drums, came in the booth with me and literally got right up on me and was like, ‘Yes! That’s what I’m talking about!’ And man, that just inspired me that much more. That turned out to be one of the most fun songs that we did. Once we finished the song, I was like, ‘Man, I’ve got to get my dad on this.’ He probably was in the studio when they originally cut this song.’ Dad was in Chicago. They went and picked up my dad, and they cut his track.”

He says that the sessions in Memphis and Nashville each added their own individual flavors to the songs that were recorded for the new album.

“We used some of the same musicians that played on a lot of those hit records down there at that studio [in Memphis]. Matter of fact, we used the same mics,” he says. “The same mic placement. Boo Mitchell, who is Willie Mitchell’s grandson, he runs the studio and Willie Mitchell showed him and taught him everything he did back in the day. Even like where we placed the horns, tracked the horns and when we tracked the strings. That just immediately took that vibe, and we all kind of felt it. Even Angie Stone — we both were singing on the same mic Al Green did all of his stuff on. Ann Peebles, all of it. It was like walking into a museum. It immediately took that vibe. And then of course, Nashville, was the same thing.”

His version of Eric Clapton’s “Old Love,” a longtime setlist staple in Brooks’ own shows, calls to mind a number of experiences, including sitting in the audience at Buddy Guy’s club, Legends, in November of 1994, watching his father jam with the guitar legend during one of the three intimate shows that Clapton played there. Later, he and his dad were again backstage with Eric and he learned that he was already on Clapton’s radar.

“He came back to the United Center here, and we got to hang out with him again. We didn’t play with him that time, but we got to hang out and talk and that’s when I gave him my Torch album,” he recalls. “It was funny, because my dad was like, ‘Eric, I want to introduce you to my son’ and Eric’s like, ‘I know Ronnie! Matter of fact, my father-in-law loves Ronnie!’ And I’m like, ‘What?’ His father-in-law had a club in Columbus, Ohio called Blues Station. I used to play there and he would call Eric in the middle of the night, ‘Man, you need to come check out this guy, Ronnie Baker Brooks.’ Eric’s like, ‘I know his daddy.’ But when I got to the show here in Chicago at the United Center, he’s like, ‘Yeah, I know Ronnie. Matter of fact, my father-in-law loves Ronnie. He’s here. Let’s go meet him! So he took us back to the other green room where his father-in-law was and he’s like, ‘Ronnie! Eric, that’s the guy I was telling you about!’ He’s like, ‘I know, I know!’ It was funny, man. But i didn’t knew that Eric, I mean, I knew my dad, but I didn’t know that he knew of me. It was a good humbling inspiring moment.”

Brooks will spend the year touring in support of the new album and has a steady stream of shows on deck including a return engagement at the Music Box Supper Club. He says he’s looking forward to being back in town and left us with a simple message: “Tell everybody to come on out!”