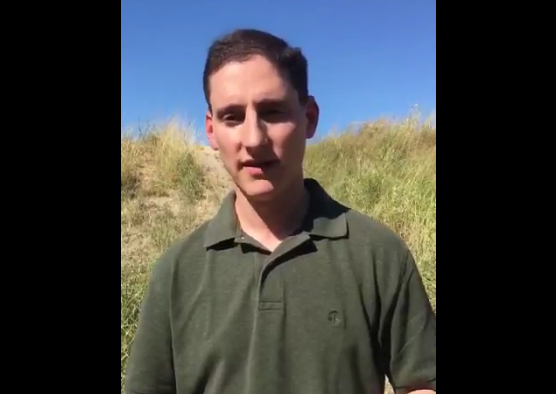 Josh Mandel, the Treasurer of the state of Ohio, who is also running against Sherrod Brown for a Senate seat in 2018, made a really stupid video somewhere on the border of Mexico and the U.S last week. (Or quite possibly somewhere on the side of the road in Dublin or something. Either way, he tweeted it last night.)

Complaining that politicians in Washington declined to fund Donald Trump's wall last week (Trump backed off demands to include money for the wall in short-term funding that eventually passed to avoid a governmental shutdown as contentious opposition mounted), Mandel railed against their opposition and their choice to fund sanctuary cities. Never mind that it wasn't a binary proposition, or that a federal judge blocked Trump's efforts to withhold federal funding from sanctuary cities, or... what even the fuck is he talking about? Also, why was he at the border? (A message to a Mandel spokesperson on that point wasn't returned.)

He goes on to say it's not his first time on a border, citing his military experience at the Iraq/Syria border, which isn't exactly the same thing as the U.S/Mexico border, but we digress.

"My message to [House members in D.C.] is listen to the American People, listen to your President, listen to the Constitution, stop being Democrat-light, and vote to fund this wall."

Enjoy the video below, but before you do, a reminder that a variety of recent polls show 60-percent of Americans oppose the "big, beautiful" wall that estimates show would cost some $21 billion.

Politicians in the US House can learn a lot from a mound of dirt and a battalion of Marines. pic.twitter.com/H5PfCi0TyN