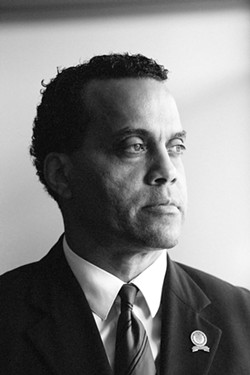 Councilman and mayoral candidate Jeff Johnson said in a public Facebook post Monday that recent attacks against him regarding the eligibility of his candidacy would be "defeated soon."

"I have already accepted my past mistakes and the punishment that came with it," Johnson wrote. "From then on, the Ohio Supreme Court, Cuyahoga County Court and the voters of the two city wards I have been elected to the last eight years, have recognized my achievements and given me a second chance. I continue to thank them for that."

Late last month, a resident named Ed Davila filed a challenge with the Cuyahoga County Board of Elections alleging that Johnson was not allowed to hold public office because of his criminal record.

Davila cited an Ohio law that bars people convicted of bribery from holding public office. Johnson responded at the time that the charge was without merit and reiterated that position Monday. He was convicted of extortion, he said, not bribery.

In an interview with Cleveland.com, Davila didn't appear persuaded by that defense: "I guess one man's extortion is another man's bribery," he said.

The Board of Elections will hold a hearing May 15 to consider the challenge.

Johnson's message to his supporters Monday was not only a response to critics of his criminal record, but also a reaffirmation of his "Neighborhoods First" campaign. It was, moreover, an additional rebuke to Mayor Frank Jackson's "Healthy Neighborhoods" legislative agenda, some of which will be introduced to City Council today.

"All residents of Cleveland share a desire to live in a city that we feel prioritizes us and respects us as unique and special," wrote Johnson. "It does not matter to me where you live in Cleveland, or what your race, ethnicity or personal wealth is. What matters is you chose to live in Cleveland, and I am fully committed to you first and foremost. “Neighborhoods First!” is more than a slogan to me. It represents my love and commitment to Clevelanders, and those who support us. You deserve a Mayor fully committed to investing in you, and where you live… every day, month and year — not just during an election year."