Vermilion Police Find Nothing Wrong in Investigation of Woman Who Threw Her Dog into Lake Erie: UPDATE 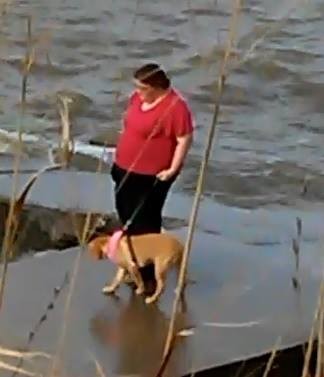 Vermilion police found no malicious intent by the woman caught literally throwing her dog into a windswept Lake Erie this week. She will not be facing charges, as the Morning Journal reports today.

As she told the man filming her actions (see below), detectives reported that she was trying to teach her dog how to swim. It's hard to know what to do with a headline like 'Vermilion police say woman was not attempting to throw dog in Lake Erie,' unless perhaps detectives missed the 35-second mark on the video below, right before the camera shifts.

Last night, video surfaced showing a woman throwing a dog into Lake Erie amid very high winds and waves. (See the video below.) As one can easily tell, the dog did not want to go into the water at all.

Youtube user Elijah Boggs posted the video, which shows him confronting the woman. She explained that she was "training the dog to swim," and Boggs counter that she shouldn't be doing that in rough weather.

Boggs also noted that he called Vermilion Police Department, which did not immediately respond. By this morning, however, the video had gone "viral" and police had shared it with their Facebook audience. The department eventually identified the woman.

We'll keep tracking this case to figure out what in world was going on with this poor pup. (Note: Boggs wrote, "The dog and her walked away dog still wet.")