County Jail Officers Missed Order to Keep Two Inmates Separated; One Ended Up Beaten and in the Hospital 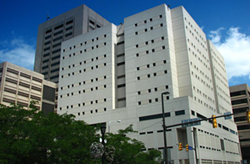 Larry McGowan entered into a plea agreement recently on charges that he assaulted Rayshon Reese, a fellow inmate at the Cuyahoga County jail, on July 17, 2016. Reese had been serving out a sentence for rape, burglary, kidnapping, felonious assault and robbery charges in 1992 at a different state facility but had been transferred back to Cuyahoga County on July 2, 2016, in advance of an expected release in August. McGowan, a serial rapist and murderer whose case is particularly disturbing, was and is currently serving a life sentence with parole possibility after 40 years.

It's unclear how the two had known each other, but there was a history of some sort that led to a "Keep Separate From" order to be placed in their files in the Incarceration Management and Cost Recovery System (IMACS). KSF orders exist to prevent altercations and assaults between inmates who, because of recent or distant histories, might be inclined toward violence with each other. Whatever the history in this case was, a KSF order was present between Reese and McGowan and, a source said, had been since 2003.

Despite that fact, the inmates ended up housed together in July of last year.

A Request for Movement/Reclassification Form, which is filled out whenever an inmate is transferred between or within facilities, was processed for Reese. The line officer is supposed review the slip and process the information in IMACS, which then alerts the officer to any KSF orders. A classification officer then confirms the information and assigns a new cell.

According to an investigation done by the Cuyahoga County Sheriff's Department, Officer Christopher Little initially filled out the reclassification form. He told the investigator that the KSF order "did not show up." Sgt. Saheim Muhammad signed off on the form. Corporal Eddie Griffin, acting as the classification officer, then processed the form. Griffin told the investigator he does not check for KSF orders.

That stretch of blunders led Reese to be housed in the same pod as McGowan, despite longstanding orders for the two to be separated.

On July 17, after an argument over what was being watched on television, McGowan grabbed a broom and swung it like a baseball bat, striking Reese repeatedly in the head, three times in total. When Reese was on the ground, McGowan also punched him in the face. Reese was transferred to MetroHealth. Sources said the beating was vicious and bloody, with Reese's skull being busted open.

The officer on duty for that pod that day, officer James Spirakus, also deserves blame, according to the investigatory files and accounts from other offices. He stepped away from his duties to make a phone call right before the incident, he told the Sheriff's Department. He also said he could not remember who he was on the phone with. The summary of his interview is below. 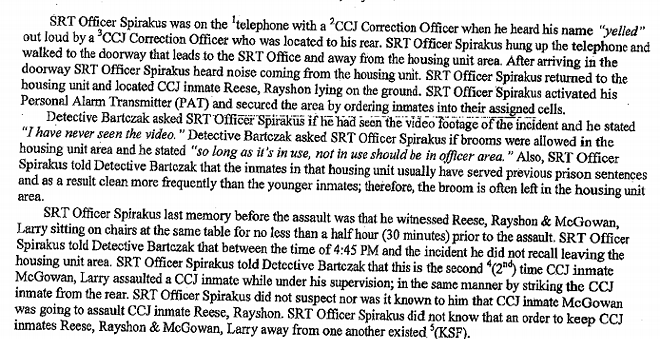 If it sounds at all to you like discipline should have been delivered to some or all of the officers involved, you wouldn't be alone. Sources tell Scene, however, that none faced any punishment. We're awaiting confirmation from the county on that bit and will update the post when we hear from them.