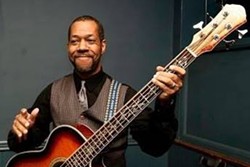 A fixture on the local musicians scene, bassist Derek Poindexter performed with several local acts, including the groups Pale Hollow and Pleasure Void, a local band we wrote up back in 1999.

A member of the house band for the local production of Hedwig and the Angry Inch, Poindexter didn’t discriminate when it came to genre. He played a bit of everything with everyone; he even taught music classes at Tri-C.

Poindexter’s health took a hit earlier this year when he contracted a chronic lung disease. Two weeks ago, local singer Erin Rossi hosted a benefit to offset his medical expenses; hundreds of local musicians and fans attended the event.

Tragically, Poindexter, who was on the waiting list for a lung transplant, has passed away at age 52.

The kind comments posted by friends and acquaintances on his Facebook page suggest the degree to which he was loved and admired. Our thoughts go out to his family. He will be greatly missed.