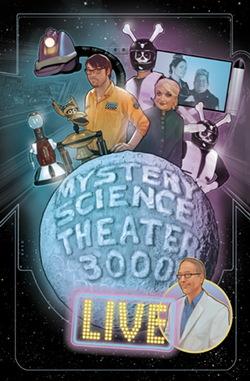 For almost 30 years, the award-winning comedy television series Mystery Science Theater 3000 has been known as one of the top cult TV shows of all time.

The story of a human host and his robot sidekicks trapped aboard a satellite and forced to watch cheesy movies by their captor, MST3K has maintained its reputation thanks to its fervently devoted fan base, known as MSTies.

Created by Joel Hodgson, the first season of Mystery Science Theater 3000 aired in 1988 on a local TV station in Minneapolis. The show followed a hapless host forced to watch “some of the most outrageously unfortunate B movies ever created.” To keep his sanity, he builds two robot sidekicks and they help him provide a running commentary on the films.

MST3K has been going strong ever since; the Comedy Channel (later known as Comedy Central) helped it attain a national audience by broadcasting its episodes.

Now, Hodgson and new host Jonah Heston (Jonah Ray) will bring the first live touring production of MST3K to Cleveland on the “Watch Out for Snakes!” tour. Robot companions Crow (Hampton Yount), Tom Servo and Gypsy, along with Synthia (Rebecca Hanson) and her Bonehead henchmen will join them on the tour as will the Mads, Kinga Forrester (Felicia Day) and Son of TV’s Frank (Patton Oswalt),.

The tour comes to the Ohio Theatre on Aug. 8. Tickets go on sale at noon on Friday.