May 19, 2017 at 1:20 PM
comment
A $10,000 reward is being offered to anyone with choice information about three men who stole a used Porsche Thursday night from Bernie Moreno Companies' Mercedez-Benz dealership in North Olmsted, Ohio.

According to the company's Facebook page, the three men asked a salesperson for a key to a Porsche "to hear what is sounds like." They then started the car and in the process of giving the key back, switched with an identical looking fake key.

Later that night, the three men returned to the lot and drove the stolen car "over the curb." The dealership also got copies of their IDs which turned out to be fake as well.

"We've gotten a zillion leads," Bernie Moreno, president of Bernie Moreno Companies, said over the phone today. Moreno said he's not sure if any of the leads are substantial, but he's sure the authorities are doing a thorough job.

The company has now installed their inventory with a LoJack theft recovery system, Moreno said.

Anyone with information can send an email to tom@berniemoreno.com. 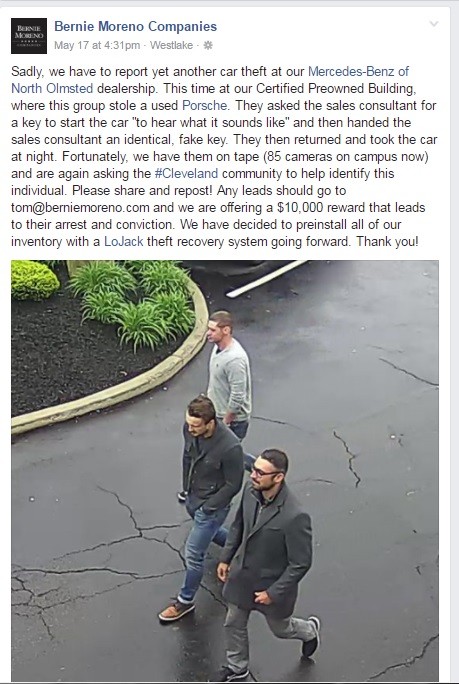