Clean Up The Outside World: Volunteers Plant Trees in the Cuyahoga River Valley, And You Can Too 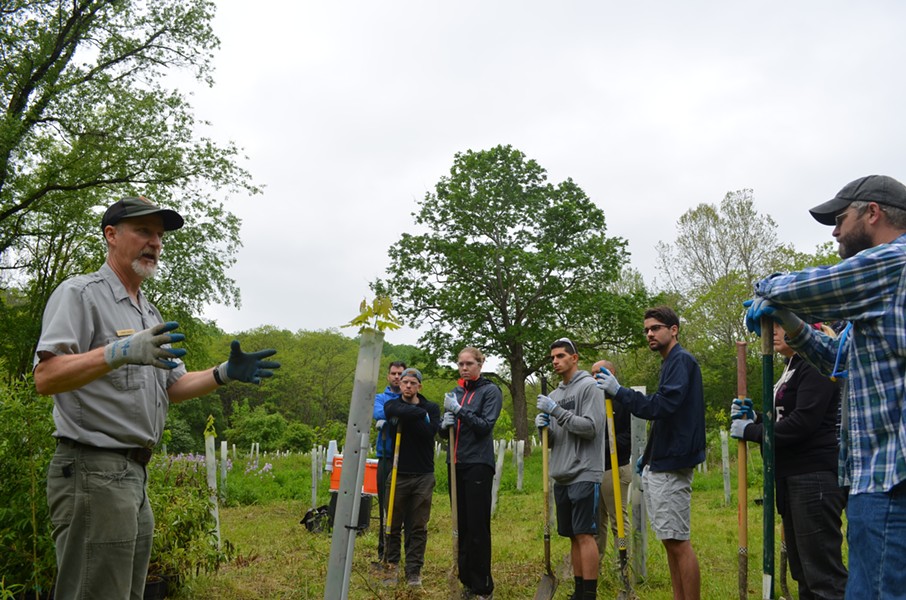 The buses arrive one by one, spilling dozens of volunteers into the Furnace Run watershed in Cuyahoga Valley National Park on May 20. It is River Day, and folks from around Northeast Ohio congregate to plant saplings across a gentle slope of land. The Cuyahoga River meanders peacefully along the nearby trail loop.

Part of the idea here — and in parks throughout the country — is that the natural world is in a fragile state now, in need of hands-on involvement. Human impact on our riverbeds, forests, fields, shorelines, etc., has irreversibly changed much of the environment. Here in Furnace Run, deforestation in the late 19th century led to decades of land-flattening farming; what’s left now is a sparsely populated watershed overrun with invasive species. (Some 20-25 percent of CVNP flora comprises invasive species these days.)

Today, the River Day crew is planting trees and shrubs: elderberries and dogwoods and several species of oak, for example. Plant ecologist Chris Davis says that the main goal is to establish a sort of safeguard against stormwater runoff (by seeding a broad root structure and enriching the soil) and provide a thicker habitat for the park’s breeding and migratory birds. It's all of a piece.

“Just walking away and letting nature takes its course — that’s not healing nature,” Chris Davis says. “That’s just letting nature unravel.” He points to a nearby multifora rose, whose species invaded the Cuyahoga River valley in the late 1800s; the U.S. government promoted it as a nice “natural fence”-type species, but now it’s overrunning natural habitats and outcompeting native saplings. That’s a problem for the ecosystem's balance.

Our past impacts on nature have brought us to a place where we must manage the outside world.

Similarly, there’s the problem of accelerated erosion along the edges of old farm fields, which look very pretty from the road. Upon closer inspection near the river, though, where there should be giant sycamores and broad root networks, one finds only bare dirt falling six or eight feet into the flowing water. That sediment ends up closer to Lake Erie, where a massively expensive dredging campaign has driven political tension and further environmental hazard.

This is the sort of stuff, anyway, that Davis and the CVNP’s corps of volunteers are thinking about when they’re in the park. It’s a narrative that too often rests just below the more general American sentiment of “let’s just enjoy nature.” Hence the whole River Day project.

“The tangible thing is, yes, eventually this [tree-planting project] helps reduce the erosion that is costing literally millions and millions of dollars every year in Cleveland,” Davis says. “And Cleveland is not necessarily paying for it. It’s the U.S. Army Corps and sometimes the Port, but somebody is paying big bucks to dredge out the sediment that we should just be holding here, growing plants on.”

As another bus arrives, Davis lays out the day’s work. Each volunteer grabs a shovel, and they congregate around a row of red osier dogwoods. Davis mowed down some paths through the nearby meadow, and he tells the volunteers to plant in the tread. It’s a simple enough task, but, of course, there are always a few people in each group who’ve never planted anything. (“The most important thing to remember is not to plant them too deep,” Davis tells them.) First-time volunteers are extremely welcome to all of these sorts of events.

Caitlin and Devlin caught the national park volunteerism bug on Earth Day. Scene speaks with them as they’re planting their fourth sapling of the morning. “We had a lot of fun planting trees, so we came out again for River Day,” Devlin says. “It’s nice to wake up on a Saturday and get the day going by volunteering. You feel affirmed.”

This story will appear in our annual Summer Guide, in print on May 24.