Who Are All These Randos Running for Mayor? Should You Care About Them? 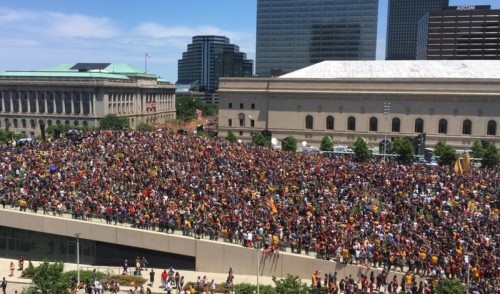 The Cuyahoga County Board of Elections' official candidate list currently includes 17 people running for Mayor of Cleveland. But it's missing Mayor Frank Jackson, who is most certainly running; Fresh Brewed Tees' owner Tony Madalone, who announced his candidacy yesterday; fiery former East Cleveland Mayor Eric Brewer, who announced his candidacy via Facebook back in February; and the Donald-Trump-supporting, Eastern European Warehouse District club owner Velimir Lucic, who has a campaign Facebook page, but little else.

Hundreds more may be waiting in the wings, biding their time.

It's reasonable to assume that many of the "candidates" may not successfully gather the necessary signatures. At least one, the young community development idealist Ja'Ovvoni Garrison, has already backed out. Others, like State Rep. Bill Patmon and the politically independent Robert Kilo, are perennial contenders who don't stand a chance. Most of them haven't done anything resembling "campaigning" — though to be fair the primaries are still three-and-a-half months away.

Regardless, the field is becoming cluttered. But that's okay. With so many big personalities in the mix, and several legitimate options for Cleveland voters, 2017 is shaping up to be the most exciting local election since 1989, when Michael White defeated George Forbes after a powerhouse primary lineup that also included Tim Hagan, Benny Bonnano and Ralph Perk Jr. White then, of course, began the longest mayoral tenure in the city's history.

If Frank Jackson is elected to a fourth term, he will eclipse White as the city's longest-serving Mayor. He intends to do so, considering himself the only candidate equipped for the job. But he is unaccustomed to resistance. After he defeated Mayor Jane Campbell in 2005, he has retained his position without serious opposition. In 2009, he crushed Bill Patmon. In 2013, he laid waste to Ken Lanci, the orange gasbag whose candidacy never transcended the level of a ridiculous joke.

This year, Jackson has bristled at his challengers, at least two of whom mean business. The Mayor recently got heat for saying councilman and mayoral candidate Zack Reed was "pimping" opposition to the Mayor's controversial dirt-bike track for political gain. At 70 years old (he will be 71 in October), Jackson is frailer and less coherent than he's ever been. So, too, are his top personnel — Michael McGrath, Marty Flask, Ken Silliman? These men look dead. His administration has been said to be in disarray, though his communications staff has been recently enhanced. They're working overtime to announce and promote new legislation as City Council nears its summer recess. Meanwhile, opposition to the Quicken Loans Arena renovation deal grows ever more inflamed after council rejected petition signatures for a referendum this week.

In the past month, Jackson has inundated the press with almost-daily releases about legislative packages, city infrastructure, awards and recognitions, and public safety. (Today he announced a "demolition strategy.") This is highly unusual. The Mayor has communicated two key messages during this spate of activity: 1) Much of these actions are the result of a citywide tax increase that voters approved last year. The Mayor has repeatedly stated his gratitude. 2) These actions — particularly the so-called "Healthy Neighborhoods" legislative agenda — are the result of years of intricate planning and patience. That message is, in large part, a response to challengers who have claimed that Jackson is only bothering to legislate now because it's election season.

The three most serious candidates in the race, make no mistake, are Frank Jackson, Jeff Johnson and Zack Reed. Barring the late entry of Dennis Kucinich, as Cleveland.com editor Chris Quinn has twice speculated upon during WCPN's Reporters' Roundtable, these will remain the "Big Three." Both Johnson and Reed represent wards on the city's east side, and both object to recent actions by the administration, in particular (in Reed's case) the Mayor's ghastly bungling of the Public Square situation, and (in the case of both) the Mayor's and council leadership's support of the Q deal. Johnson has made neighborhood investment the centerpiece of his campaign. Reed has zeroed in on violence and jobs, the latter being an antidote to the former in his vision.

Two additional challengers, Brandon Chrostowski and Tony Madalone, are entrepreneurs who are new to politics but are frustrated by the status quo at City Hall. They see themselves as capable outsiders with the energy and personality to turn the city around. Madalone's slogan is "A New Mindset."

Neither have offered much in the way of concrete policy suggestions — Chrostowski has said that he hopes to use principles of his EDWINS Leadership and Restaurant Institute, which employs formerly incarcerated people, in other areas of the city; Madalone has proposed the immediate creation of a city department of transportation — but both are well-intentioned and do have some interesting ideas. Curiously, both have dismissed outright the idea of running for City Council (though Chrostowski, in Ward 6, would be an interesting challenger to the recently appointed Blaine Griffin). They insist that the only way to make change is at the very top.

Madalone, in a press conference yesterday, suggested that his desire to "speak from the heart" was what immediately separated him from the other candidates. "I'm going to always be honest with you," he said. "I'm going to always be transparent and accessible." He said that his campaign was not "a publicity stunt" — he had no T-shirts for sale — and that he was tired of seeing the current administration communicate, by their words and actions, that the people don't matter. Madalone wasn't definitive in his stance on the Q deal, telling Scene that it wasn't an either/or proposition. "If the administration had taken care of these communities for the past ten years, they wouldn’t be this upset," he said. He was, however, deeply disturbed by City Council's actions on Monday in rejecting the petition signatures.

Chrostowski, for his part, has come out in strong opposition to the Q deal. He submitted his signatures to the county board of elections Monday.

The bigger news, this week, was the dismissal of a legal challenge to Jeff Johnson's mayoral candidacy.

The Board of Elections voted unanimously (4-0) to dismiss the challenge, in line with an opinion written by Summit County Prosecutor Sherri Bevan Walsh. Johnson had maintained his eligibility on technical grounds — he was convicted of extortion in 1998, not bribery — but it held up. Johnson has always been open about his past, for the record.

“We have been confident all along that the complaint was without legal merit and that the process would catch up with the facts,” said Johnson, in a press release. "I have paid the price of my mistake of over twenty years ago, and I appreciate the second chance the courts and the voters in Cleveland have given me...We know there will be other political attacks, and we expect our opponents will continue to try anything to stop us. They will fail, and the voters will win by voting in change at Cleveland City Hall this September and November."

On the Jackson front, we reported this week that the Mayor had not yet pulled petitions at the Board of Elections. And it's true, as we stated in the first paragraph, that his name does not appear on the official candidate list. But we were informed by someone who had signed a petition for Jackson that the Mayor is indeed collecting signatures. If that's the case, Jackson either pulled petitions anonymously, or someone pulled them on his behalf. The city has not yet responded to which of those may be the case.