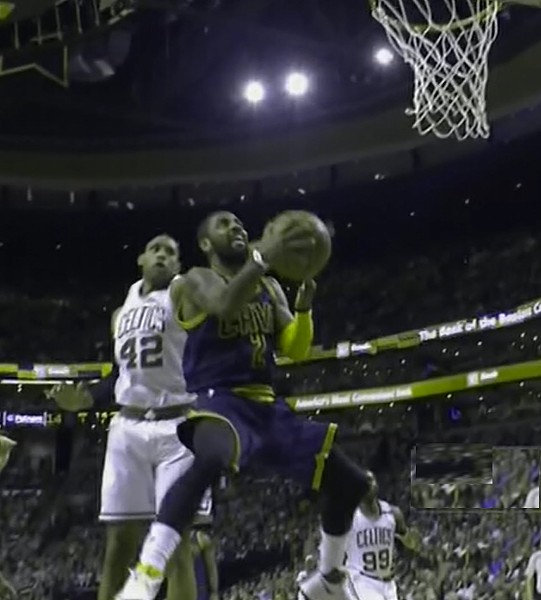 It promises to rival the Ali/Frazier's famous third rubber match, The Thrilla in Manila, yet Cavaliers-Warriors III is the culmination of arguably the most anti-climatic playoffs in NBA history. It could've been a romantic comedy, really any romantic comedy, puffed up like cotton candy on faux drama and ratcheted tension, leading after an interminable build-up to the main event: “Will he or won’t he?”

What the hell do you think? David did Maddie long before he Died Hard, and Diane was into Lloyd without Peter Gabriel sealing the deal. Whether it’s Samantha and Jake, Sam and Diane, Ross and Rachel, or even the cagey Mulder and Scully, the only real question is how long they can milk the tension. Since the NBA’s sort of on the clock, they could only stretch it out for eleven, somewhat mind-numbing months.

Now it’s finally official: No happiness in BelieveLand until Steph, Dray, Klay and KD wear the tears of Jordan.

If it had been scripted, it couldn’t have come out better. But who needs scripts when you have the two best teams in basketball? Sure they ultimately faced off against injured opponents, allowing them to roll even more convincingly to what the NBA had to know would be a massive payday.

Not since Lakers/Celtics has there been a rivalry worthy of typical postseason hype. And let’s be honest, even if the NBA knew this was the best outcome for the league, it wasn’t like Golden State or Cleveland needed a push, they were destined for each other like the immovable force and the irresistible object (Chuck and himself, respectively, in Shaq’s mind).

Cleveland arrived last night via Boston’s TD Garden where they cremated the Boston Celtics and blew the ashes in Tommy Heinshon’s face. Those three games in Boston featured some of the most graphic violence since Prince Oberyn Martell pranced around thinking he’d defeated the Mountain.

Boston never had a chance. Okay, they had one chance, when LeBron James was half-defeated by a bug – but not for long. Last night he returned to form with 35 points, 8 rebounds, 8 assists and just two turnovers after making 11 the last two games. He made 13-18 and 4-7 from 3, including three in a row during a 15-point quarter as the Cavs squeezed the last air from the Celtics lungs, outscoring them 34-17 in the third, leaving them gasping like the fish from the Faith No More video.

There’s not a lot to say. The Celtics weren’t in the Cavaliers league before Isaiah Thomas went down, and arguably, the Raptors posed the bigger challenge before Lowry went down. The Pacers certainly posed the biggest challenge on paper, but whomever the Cavs played in the first round was going to face a more tired, less focused Cavs team. Blowing several big leads, that’s what they got.

But after the week-plus breaks between the first and second rounds, the Cavaliers had a chance to get healthy and focused on the task at hand. Unlike last year when their might’ve been some trepidation and fear, many of them have now faced a moment like this. Certainly Love and Irving’s injuries in 2015 raised some questions how they’d respond to the moment in 2016, which they've since answered.

That test passed, all that was really left for the Cavaliers to do was get down to business. While the regular season suggested Cleveland’s a mediocre team when unfocused, the playoffs have amply demonstrated that when locked in, this Cavaliers team is in historic territory. Talk all you want about the great Warriors team, but be sure you save time to contemplate the arguably the finest playoff performance in history by James. These are some evenly matched teams.

While these postgames are typically postmortems, there’s very little left to examine of the Celtics corpus. They didn’t lead at any point during the three games in Boston and lost by a combined 90 points. It was a demonstrative application of blunt force trauma. The Cavaliers didn’t even give them a moment to bend over and cough. But the diagnosis was the same: “Thanks for coming and enjoy these lovely parting prizes. Don Pardo, tell them what they've won for participating!”

If it weren’t for Marcus Smart briefly turning into Vinnie “the Microwave” Johnson, the Cavaliers would’ve entered the Finals with the same 12-0 record as Golden State. As it is, the differences in their stats are miniscule. These are very evenly matched teams which arguably split the eight best players on the floor almost like a Serpentine draft (i.e., Cavs get 1st & 4th, the Warriors 2nd & 3rd).

A couple things do pop out. The Cavaliers allowed fewer points off turnovers, second chance and fastbreak points while also fouling much less than the Warriors – ways where they will hope to exploit the Warriors defense. Their offense makes a few more turnovers and is a little worse on the offensive boards – beating Golden State on second chance points, points off turnovers, and points in the paint will be key.

Plus the Cavaliers are even more explosive than the Warriors and averaging 2.5 more threes on 2.5 more attempts, shooting 44% to the Warriors 39% from behind the arc. But we still have a week to digest all the particulars of the Warriors matchup.

The fact that the Cavaliers lost a game helped serve a wake-up call according to Kyrie Irving who demonstrated how comfortable he is taking over when James isn’t feeling it, during Games 3 and 4. The experience will come in handy.

“In Game [4], I knew that if we kept it within 10, a surge was going to happen. I wasn't sure when. But I knew that I had to make the conscious choice to really lead our guys, understanding the situation that we were in,” Irving said last night. “You look back on it and it definitely helped us grow as a team and mature. So it’s something that we needed ultimately, to lose Game 3 in the fashion that we did and the way that Boston challenged us continuously, we needed all that to propel us to this moment.”

Earlier in the day Lue provided the Warriors with some bulletin board material when he suggested that because of all their movement and sets, the Celtics were tougher to defend than the Warriors. (Warriors asst/interim coach Mike Brown, pulled a Lebowski, noting that it was just Lue’s opinion before calling his opinion “cute”.)

We couldn’t find the quote but we heard either Lue, James or Irving in a postgame interview credit the Celtics movement with being a good prelude to the next series with all its movement and screens. This is a great comment, and definitely was a great appetizer for the Warriors brand of basketball.

However it’s equally important to note that the Warriors are terrific while the Celtics are merely good. The Celtics averaged 27 open or wide-open threes during against the Cavaliers and hit 37% of them. The Warriors have hit 40% of such shots through the playoffs. Speaking again about the awesome Cavalier offense, The Cavs have made 46% of such shots (11.4-24.9) in the playoffs. But obviously they need to cut down on the number of open threes they allow.

Last year people worried about the Cavaliers and they said, don’t worry we got this and they continued to improve through the playoffs. They didn’t show up in Golden State, pretty much at all, the first two games, but still won the series.

If it’s not apparent, it should be that the only limit on this team is the one they put on themselves. When they are focused and moving the ball they’re a better team than the Warriors. It’s pretty obvious. The Warriors play their type of basketball 90% of the team, and through their professionalism and playing the game right most of the time, they’re an offensive and defensive juggernaut.

The Cavaliers will never be a defensive juggernaut; they’re more of the bend-but-not-break variety of defense. However this is one of the best offenses anytime anywhere. People lose track of the fact that basketball isn’t a sport of the five best athletes, it’s more like a SEAL team where you want five of the best specialists, which the Cavs have managed to assemble between safe-cracker Kyrie, snipers Korver and Smith, close-combat killer K-Love, beefy bruising dirty work guy Tristan, and their canny Hannibal, LeBron James.

The Cavs are devastating only intermittently – occasionally boring themselves with the routine nature of their brilliance, feeling the need to ramp up the difficult with behind the back passes and long contested jumpers. So it would seem that if the Cavaliers focused as well as Golden State, those chumps from the Land of Smug wouldn’t stand a chance.

Or put more simply, the Warriors skill is in part their ability to play at high efficiency much of the time; the Cavaliers ceiling is much higher, but they spend less time there. However, the experience of calling it the last three games of the season last year may have been indelible. While they haven’t quite flipped the switch yet, we have significantly less worry that they’ll miss the off-ramp.

They showed in the playoffs the fortitude to stay on task in most instances. Only the second half of Game 3 and first half of Game 4 posed any serious issues. Meanwhile, Irving and Love played at a very high level all series long. Thompson, too, played very well, and Deron Williams showed signs of being a tremendous threat off the bench, in a very different way from Kyle Korver. There’s no way around it – other than the lack of a paint big, this team is stacked. None of the starters put up an EFG% below 60%.

This is a short recap than we usually do, but there's little reason to look backward. We’ve all been waiting for this moment for a very long time. So let’s tear these clothes off and bow-chicka-wow-wow.

If you enjoy the writing we encourage you to check out our book, King James Brings The Land a Crown: The Definitive Tale of the Cavaliers’ 2016 Title Run, at cavschampions.com. You can follow us on Twitter @CRS_1ne, and hear us every Monday at 11 a.m. on the Defend Cleveland Show on WRUW-91.1. We’ll be doing a signing at the Barnes & Noble in Woodmere on June 10, and watch on Twitter for us to do a Warriors/Cavaliers preview podcast sometime next week.