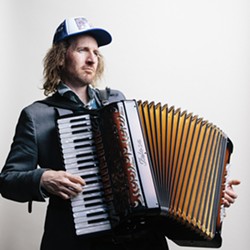 When singer-songwriter Jack Johnson played Blossom three years ago, the guy mixed things up enough — switching from acoustic to electric guitar throughout the night — to remain engaging.

Sparse songs such as “Flake” and “Never Fade,” a song about Johnson’s wife, worked because their simple melodies were so damn memorable.

And best of all, Johnson appeared to be truly having fun. He snuck a few snippets of the Cars’ tune “Just What I Needed” into “Sitting, Waiting, Wishing” and later in the set he played the opening notes of Led Zeppelin’s “Whole Lotta Love” as an intro to “Staple It Together.”

During “Tape Deck,” a song about the punk rock bands with which he used to play when he was a teenager, he related a story about the day he first met keyboardist Zach Gill, a helluva singer in his own right, and how the two played in rival bands for a short time.

When Johnson returns to Blossom on June 3, Gill, who fronts the indie act Animal Liberation Orchestra, will once again be at his side, playing keyboards and a variety of other instruments. Despite the aforementioned rivalry, the two have a strong relationship that dates back to the time when they were just starting out. Gill has seen Johnson transition from playing campfires to concert halls.

“We met in the dorms,” says Gill in a recent phone interview when asked about when he first encountered Johnson. “He had a band, and I had a band. There was a rivalry there that wasn’t too serious. They’d be playing on the same night as us. We’d vie with each other to see who had the better party. That dissolved, and we became friends. He was one of the first guys I knew who was also writing songs. When I first met him, we would show each other songs we’d written. He told me that I should sing his songs, but I tried to tell him that he should sing them. He was soft spoken and a little on the shy side.”

Gill says he initially tried to emulate other popular songwriters that he listened to as a kid.

“That’s just what you do, especially if you’re young and don’t have much life experience,” he says. “It’s like, ‘Here’s a love song, even though I’ve never actually been in love.’ I was trying to copy Billy Joel and the Eagles at first. The first song I wrote was a John Cougar Mellencamp-like song. It was about the hardships of life. It wasn’t based on life experience. It was just based on observing other people’s life experiences. The first song I ever fell in love with was ‘The Gambler.’ I remember thinking, ‘I like that song.’ The wisdom still holds. You do have to know when to hold them and when to fold them.”

While attending college at the University of California at Santa Barbara, Gill found that he could play pop-up shows in nearby Isla Vista and draw crowds.

“I think it might be the most densely populated square mile west of the Mississippi though I’m not sure about that,” he says of Isla Vista. “It’s a lot of college kids. Most of the people are underage, and there’s not a lot of bars. I played a lot of parties. It enabled you to open your garage door and you could draw a crowd no matter what kind of music you were playing and see what worked and what didn’t work. It was a good time to experiment with music. It was great. You get a keg of beer and set up in someone’s yard, and the people come.”

At one point, Johnson’s band split up, and Gill and his Animal Liberation Orchestra bandmates began to back him up. Then, they toured together. Then, they recorded together.

“At first, I would play a couple of songs with him, and then I went to Hawaii and played on [Johnson’s 2005 album] In Between Dreams,” says Gill. “For his tours, ALO would be the opening act and I would sit in on piano. Then, he wanted me to keep playing in ALO but also play in his band. That’s what happened. It’s been great. He’s helped produce ALO albums. He’s been one of my songwriting life partners for sure.”

In 2008, Gill put out his first solo album. Earlier this year, he finished recording the long-awaited followup, Life in the Multiverse. With songs such as “Eliza Grace,” a delicate, Cat Stevens-like folk number dedicated to his youngest daughter who inspired the song’s title, the album shows off his songwriting chops, and the songs are more personal than the ones on the albums he’s cut with ALO.

“In ALO, it has grown over the years and is about the four of us,” he says. “Everybody writes, and everybody sings. When you bring a song to ALO, it goes through this ALO process and everybody has a say and it can go lots of different ways when you allow the group to have its way with it. These songs felt complete in and of themselves. A lot of them were about my family or things that seemed close to me. I thought, ‘Why not turn them into a solo album?’ I had a lot of guests on the record by the end. Michael McDonald sings on a song. Friends in Santa Barbara and San Francisco jumped in too. The band has to make decisions together, but in a project like this, you can just say, ‘Yeah, that’d be great.’ It’s easy to make decisions.”

Gill says he’ll likely do his own impromptu performances as he tours this summer with Johnson.

“I don’t know what I’ll do exactly,” he says. “I might just ride out into the crowd in a golf cart. I just want to get a mobile rig and I can pop up.”
The tour marks the first time that Johnson has hit the road without a new record to push. Since that’s the case, he’s rehearsed more songs than normal.
“In rehearsal, we practiced every song we’ve ever recorded going back to the first record,” Gill says. “We’ll play the hits and delve into the set list and play songs that go a little deeper. When you get to eight albums, you have a lot of material to choose from.”

While Johnson’s music is subtle, it translates remarkably well to large venues. Gill says that shouldn’t be surprising.

“One thing that seemed to work out well is that the music has so much space in it, it fills the venues,” he says. “There’s not a ton of notes coming at you. In those big spaces, too many notes can be overwhelming. It becomes more energetic live. In the studio, you have headphones on and there’s lots of restraints.

“It’s amazing to show up in another town and people know this music, and it’s so exciting. It’s unbelievably amazing.”