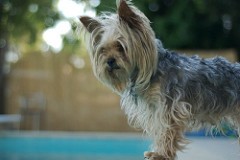 North Ridgeville police responded to an overdose report at Northview Animal Clinic on May 23. The victim was a Yorkshire terrier.

Veterinarians countered the overdose and brought the dog back via an IV injection of naloxone (Narcan). The dog made a full recovery. (Naloxone is kept on-hand at animal clinics for surgical operations.)

When police officers looked into the dog's tags, they realized that they had visited its owners earlier that day. There, the officers had spoken with several people and smelled marijuana on the premises. They subsequently waited to obtain a search warrant, during which time they responded to the Yorkie report.

Upon returning to the home, police searched the property and confiscated an extensive marijuana grow operation, including some 40 plants, as the Chronicle-Telegram reports. Charges are imminent.