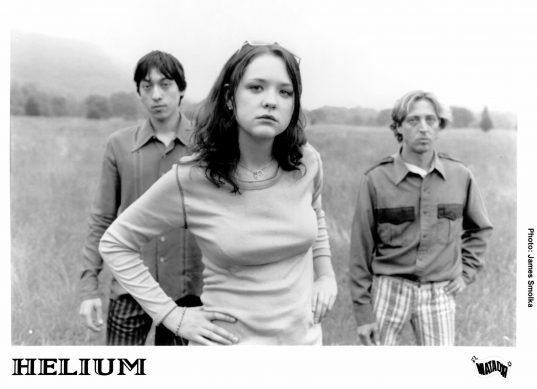 For the upcoming Helium "reunion" show that takes place on June 13 at the Beachland Ballroom, singer-guitarist Mary Timony (Ex Hex, Wild Flag, Autoclave) has joined up with the members of the band Hospitality to play Helium songs in honor of Matador’s forthcoming reissue series.

Timony fronted the indie rock band in the '90s, and her angular guitar riffs and monotone vocals gave the group its distinctive sound.

The band’s records haven’t been on vinyl in over a decade, but Matador Records recently reissued 1995’s The Dirt of Luck and 1997’s The Magic City/No Guitars. The label also released Ends with And, a brand-new collection of rarities.

“It’s been cool to revisit the songs,” says Timony in a recent phone interview from her Washington D.C. home. “It’s not as hard as I thought it would be, but there are things that I assumed I would know how to play that I had no idea how to play. It took me a while. I teach guitar to kids, so it’s like I was learning cover songs to teach them. It was a fun process.”

Timony says she likes the current lineup she’s put together to play the Helium songs but doesn’t know if it will last past the current tour.

“I’m having a blast playing with these people who are in the band right now,” she says. “They’re really incredible. We’ll just see what happens [in the future]. We don’t have anything worked out right now, but I’d like to keep it going.”

Here's what she had to say about the two reissues and the new compilation.

The Dirt of Luck

We spent on and off a whole summer recording in Philly with Adam [Lasus]. I remember it was really hot. After we did basic tracks, [bassist] Ashton [Bowie] and I stayed in the studio and slept on acoustic insulation foam in the studio all summer. We recorded all day. We were obsessed with four-track and we wanted it to sound like a four-track sounds. We used high-end gear. Luckily, Adam got into it and didn’t think we were totally nuts. He’s an awesome engineer and producer, so it was fun. I look back on it as a crazy, fun summer. It was weird when Beavis & Butthead played the video for “Pat’s Trick,” but at the same time, it helped us. I couldn’t get that mad about it. It helped people find out about us.

Mitch was great. He’s a real genius. He’s an incredible musician and songwriter but also a great engineer and all-around cool dude. We were fans of Let’s Active so it was great to record with him in his studio. He’s now built a separate amazing studio. At that time, his studio was in his house. We tracked all the tracks upstairs. The control room was in the front living room. He has this really console that I think belonged to someone famous. He had lots of cool gear. I got into playing his Chamberlin. It’s on a bunch of tracks. It’s like a magical house. It was a cool time. We had fun, but it was an involved process. We were there for a while. Ashton and hung out and did a lot of overdubs. We overdubbed a lot. I think Ashton had the idea to record there. I think I learned about Let’s Active from Ashton. The EP No Guitars was from a session that was slightly earlier.

This collection includes our first EP, Pirate Prude, which we did in Boston. We did that really, really fast. [Bassist] Brian [Dunton] was in the band at that point. We did that with Adam [Lasus], too. That one we recorded super fast. We were going for a different aesthetic then. It’s much rawer, and it’s a different thing. When I listen back to it, it sounds more ’90s to me. We learned one song that we might play on the tour. I can’t say for sure. The Superball EP was fun because we recorded it in our practice space with Eric Masunaga. We recorded it on ADAT machine, which was popular at the time. No one uses those anymore. I look fondly on that because we did it so fast in our practice space. Now, that would be totally normal. At the time, you wouldn’t do that as much as you do now. The compilation includes four-track stuff that Ashton and I did at my apartment under a different band name. There’s also demos I did with Adam from the The Dirt of Luck sessions.