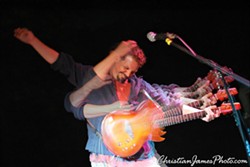 He performed off and on with the band since its inception in 1991, ultimately leaving for good in 2010. (He sat in with the band here and there in the ensuing years.) Along the way, Mullins and the rest of ekoostik hookah paved a memorable road for the Buckeye State's jam scene, particularly among its devoted fan base and community of fellow upstart bands performing at New York City's Wetlands and, locally, Nelson Ledges.

Fellow founding member Dave Katz provided this statement on his friend's passing: “I will forever be grateful that we met, and for the ‘magic’ that we were able to create together. I know that, had we not met, I would not be where I am today, or the person i am today. You and I only co-wrote one song, 'Under Full Sail.' And, the first few lines of that song are what come to mind at this moment. 'It all comes together. Sometimes fades, but never dies. Through different shades, from low to high.' Poignant, to say the least. John, on this coming birthday, and every other one I am fortunate enough to celebrate, I will think of you, and what we accomplished together. You have certainly left your mark, and will be remembered by so many. Rest easy John Mullins.”

His legacy and resonance is felt far and wide this week, with stories being swapped online and in person for miles and for years to come.

hookah plays next at Comfest in Columbus on June 23.