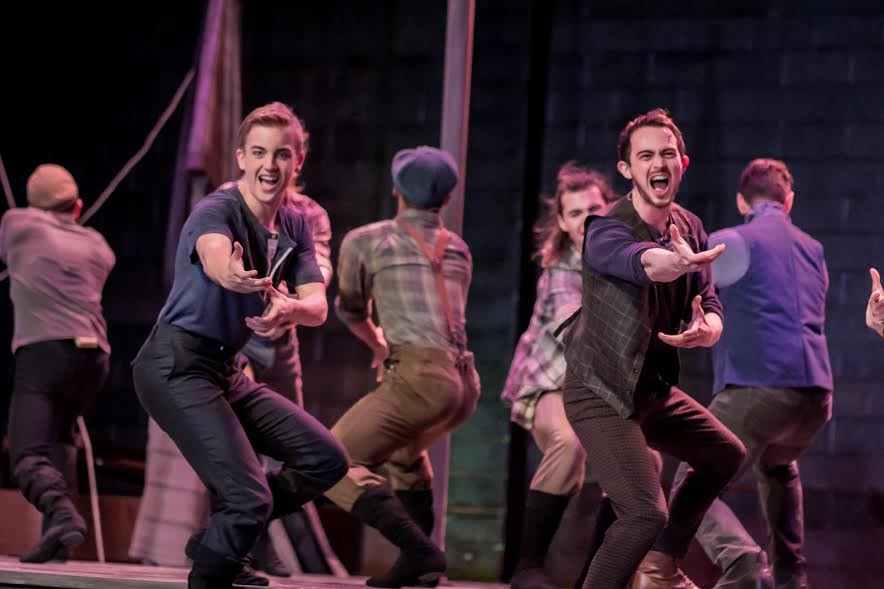 If you’re looking for reasons to see Carousel again, the iconic musical by Richard Rodgers and Oscar Hammerstein II that opened on Broadway more than 70 years ago, you won’t have to search far.

The show features signature R&H touches, such as the surprising “Carousel Waltz” that opens the show, without a word being sung or spoken, and moving quickly into the wonderful conversation-turned-song, performed by characters Julie Jordan and Carrie Pipperidge, in the form of “You’re a Queer One, Julie Jordan” and “Mister Snow.”

Carrie is the love interest of Enoch Snow, a fisherman who is absolutely head-over-heels in love until he spots Carrie getting up close and personal with Jigger Craigin (a sleazy yet amusing Brian Lego). Brian Marshall struts and prances entertainingly as Snow and, playing Julie’s gal pal Carrie, CorLesia Smith sings well but never quite finds the playful core of this character, who should be more amusing than she is here.

This was only the second show for the duo of Rodgers & Hammerstein, and its musical power ranges from the merely interesting (“A Real Nice Clambake”) to incredibly powerful (“You’ll Never Walk Alone”). In short, it’s a feast for the ears. In this production by the Mercury Theatre Company, the beauty of the music comes through, with the singers accompanied by two pianos. All the performers have some strong singing chops, and most of the songs are well represented.

As shy and docile Julie, an excellent Jennifer Myor is the punching bag for impulsive and mean Billy Bigelow. Indeed, their abusive relationship is at the center of the show. And the fact that the authors tend to forgive Billy for his beastly behavior (he supposedly pushes Julie around out of love, and because he’s unhappy with his life. Boo-hoo.) doesn’t exactly resonate well in this day and age.

But aside from that stuff, Myor and Ryan Everett Wood as Billy handle the complex song-dialog “If I Loved You” with style. Their strong voices play well off each other. And at the end of the first act, Wood sings the introspective and daring “Soliloquy” (it’s eight minutes long) with deep understanding.

There isn’t much eye candy in this production, since Nicholas
Thornburg’s set design is almost monochromatic at times—no colorful horses for the carousel or multicolored banners waving. Indeed, the design almost invites the audience to close their eyes and listen to the voices. But you’d better not, otherwise you’d miss some spectacular dance numbers choreographed by Melissa Bertolone.

By featuring a plot that touches on abuse, suicide and flawed people, it shows how the musical form was growing up back in the 1940s. It’s the earthiness embedded in lyricism that makes Carousel stand out, still today. And it’s why it’s worth a look. And a listen.