Armed Only With Acoustic Guitars, Dave Matthews and Tim Reynolds Turn In an Epic Set at Blossom 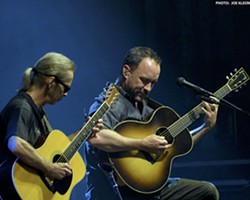 “I love this building,” said singer-guitarist Dave Matthews at the start of last night’s nearly three-hour acoustic concert featuring him and guitarist Tim Reynolds. Matthews regularly comes to Blossom with his backing band but not often as an acoustic duo with Reynolds, the DMB guitarist who first encouraged him to start a band.

An accomplished guitarist, Matthews could’ve performed a solo show and pulled it off. But with Reynolds, a virtuoso player who picked at his instrument all night long with remarkable precision and skill, he had more than enough musical ammunition to make the concert a memorable one.

Dressed in black jeans and black T-shirts, Reynolds and Matthews could’ve passed for guitar techs as they sauntered out to their respective stools and launched into “Don’t Drink the Water.” Reynolds stood, hovering over his guitar like a chemist meticulously mixing a special concoction of some sort, and Matthews simply sat, squinting his eyes intensely as he sang into the mic.

Matthews whispered menacingly on “Satellite,” a Dave Matthews Band hit that took on a more ominous tone in the acoustic setting — the deep red hue cast over the stage by LED lights also helped set the mood. “Where Are You Going” had a grunge-y feel and came off as if it were an unplugged Alice in Chains tune. Matthews and Reynolds somehow generated some percussion noises that helped turn “One Sweet World” into a vigorous jam. Reynolds played lead on “Tripping Billies,” evoking the late, great acoustic guitarist Michael Hedges as he hammered away at his instrument and soloed. The crowd sang the refrain, “eat, drink and be merry/for tomorrow we’ll die” in unison.

Prior to playing the ballad “Black and Blue Bird,” Matthews told a story about how he likes to think about how we live “on this speck of dust called earth” when he gets too wrapped up in thinking about a problem. His soft vocals really resonated on the gentle tune. “Too Much” had a manic energy to it as a video treatment that included images of a roulette wheel accompanied the song and hammered home the tune's point that too much of anything is never good.

Matthews sat at piano for a song and gave the stage over to Reynolds for a moment before returning to effectively alternate between singing falsetto and rapping as he and Reynolds delivered the set-closing “Ants Marching.”

The band would return for a three-song encore that commenced with the bluegrass-y “Corn Bread,” a song that found Matthews really snarling as he sang about “dancing with the devil.” Matthews' voice might be a bit raspier these days, but that only gave the songs more grit.

Matthews’ fans lived up to their party hearty reputation — we suspect the guy in front of us spilled more of his drink than he actually drank. But patrons, which filled about three-fourths of the venue, clearly knew all 28 songs in the set and responded so enthusiastically to the performance that Matthews repeatedly thanked them for attending.