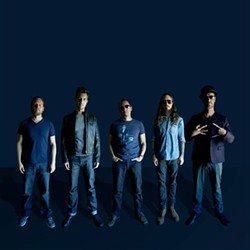 Summer wouldn’t be summer without a 311 concert. The SoCal-by-way-Omaha rap/rock/reggae band has hit the road every summer for the past 18 years, and this year is no exception. The band performs at 8 p.m. on Thursday, June 22, at Hard Rock Live.

“Well, we fortunately got into touring and recording because we love music, of course,” says drummer Chad Sexton in a recent phone interview from his L.A. home, where he had just hit up a farmer’s market and was prepping for the tour. “We have not been touring in the fall at all. We’ve been hitting it a little in the spring, just sporadic shows. We hit the summer, sometimes shorter and sometimes longer depending on if we have a record out or not. We just kind of figured we got into this for music’s sake, and we should be playing music every summer. It’s just sort of an event. And at this point, we’ve built up some real connection with our fans.”

He says it’s been a “dream” to keep the band going for the past few decades even if it’s gotten harder to leave family members behind. “It’s sort of a balancing act,” he says when asked about devoting so much time to touring. “We’ve grown up loving the music part of it and not the industry part of it. We don’t only tour to sell a record. We just want to have an outdoor vibe every summer for our fans. Some of our favorite bands like the Grateful Dead used to do that.”

When 311 emerged out of Omaha in 1985, the whole rap-rock thing was still in its early stages. Even though 311 could hardly be classified as metal, the band, which sounded more like the Red Hot Chili Peppers than Korn, was still considered a forerunner, even though it initially didn’t have the same notoriety as many of its musical peers.

That all changed in 1995 when 311 became a hit, and the band up-scaled into bigger venues. While rap-rock has gone out of fashion, and 311 hasn’t really evolved or changed its musical approach, it has somehow continued to play mid-sized venues and fill them with young, rabid fans.

“That was unexpected,” says Sexton when asked about the album's commercial success. “I think the third single is the one that started everything so that wasn’t until about a year after we released it. Being in the middle of it and working so hard and traveling so much, we were just excited to have some success. Back then, it was one dream after another dream coming true for us, so we were really stoked. That gave us motivation to continue.”

This year, for the first time in a few years, the band has a new album to promote. Its latest release, Mosaic, comes out next week. Produced by John Feldmann (Blink-182, Panic! At the Disco) and Scotch Ralston, the album took more than two years to finish.

“We’ve had a very unique relationship with Scotch, whom we met in 1992, and we couldn’t be happier with that relationship because he knows the band so well and approaches the sound in the manner that we would still want to approach sound, even though there’s all this technology out which is kind of the same way we approach the road,” says Sexton. “We’re playing live instruments mostly for the mix and so we like a natural approach to that. We don’t like to limit everything or compress everything or zero everything out on the board and just have the limiters try and help mix it. Not to say we don’t use technology, but our angle is more of a natural angle. That’s rare these days.”

The album’s first single, the Sublime-inspired “Too Much to Think,” embraces a reggae vibe with its thick bass riff and offbeat guitars. When Nick Hexum sings, “I wanna get high/but you’re keeping me low,” you can just imagine fans lighting up and swaying to the song’s mid-tempo groove.

“Musically, we’ve always done a little bit of reggae,” says Sexton when asked about the song. “We’ve been known to mix reggae and rock. The song is just about wanting to be happy and not have people try to compete with you. There’s a little blurb about Los Angeles in there, and the vibe that you can see if you have lived here for a while. It’s a little tiny story about that.”

With its mid-tempo groove, “Too Late” starts out like an Incubus song but then distorted guitars and echoing vocals kick in. SA, the band member who does all the rapping on the albums, drops a few sputtering raps into the mix, giving the tune a Beastie Boys vibe.

“That’s kind of been a staple of ours— sometimes inside a song and sometimes song to song," says Sexton when asked about the tempo changes. "We’ve been known to write such hard rocking songs such as ‘Fuck the Bullshit’ and then do such ballad reggae songs like ‘Amber.’ And once again that comes about because we’re really musicians at heart; we’re musicians first. We like to play different stuff; we like to challenge ourselves at this point even."

Sexton says "Too Late" provides an example of how the band can "lay it down with a normal groove and then take it up to a hard rocking place."

"It’s just something we’ve been practicing our entire careers," he says. "Obviously, the trick is to make it believable and to play each section as if you’re playing the entire song like that. We luckily have been able to practice that before, and that song just kind of came together. There’s quite a few moments like that on the record. We were trying to not maybe exaggerate but maybe make sure we have that happening a lot on the record. Our playing is really refined but sometimes has attitude too.”

The band’s 30th anniversary is just around the corner, but Sexton says band members haven’t discussed what they’ll do to mark the occasion.

“I think suppose we’ll think about it when it starts getting closer in the next few years,” he says. “And that’s just a weird sort of thing because even though we’re a little older, I always mistake myself for being 33 or 34. To be in a band for 27 years is like, ‘Whoa, it’s getting a little weird here. How’d this happen?’”