7 Concerts to Catch This Weekend 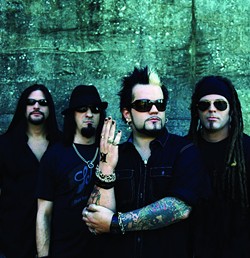 After being around for 21 years, the hard rock act Saliva has somehow survived. Its ninth studio album, Love, Lies & Therapy, represents the band’s second album featuring singer Bobby Amaru. It’s also the first for newest bassist Brad Stewart. Expect to hear songs from it as well as classics such as “Click Click Boom,” “Ladies and Gentleman” and “Your Disease” at tonight's show. (Adrian Leuthauser), 7 p.m. House of Blues.

The indie pop act Miike Snow's latest album, iii, has been its biggest breakthrough to date. The album includes the hit singles/videos “Genghis Khan,” “My Trigger” and “Heart Is Full.” A true hybrid, the album draws from both indie rock and electronica. With its falsetto vocals and jazzy synthesizer riffs, “Pull My Trigger” sounds like a cross between Steely Dan and Marvin Gaye. Other tracks such as “Heart of Mine” and “For U,” a hip-hop number that features a cameo from Charli XCX, sound more like what passes as contemporary pop music these days. It's good stuff that should translate live despite the heavy use of electronics. (Jeff Niesel), 7 p.m. Goodyear Theater.

For the current jaunt, dubbed the Resistance World Tour, the band will focus on “social activism, equality and political awareness.” The group has even curated a special set for the show that will feature songs that relate to the current political climate. Produced by Howard Benson (Papa Roach, Flyleaf), the band’s latest album, Generation Doom, gives the group plenty of ammunition. It features a compelling mix of hip-hop, metal and spoken word — its songs clearly advocate fighting the powers that be. Album opener “Zero” features parched vocals and pounding drums as Shamaya screams, “I don’t give a fuck.” Expect to hear it and other tunes both old and new at tonight's show. (Niesel) 6 p.m., $15 ADV, $18 DOS. Agora Ballroom.

To date, the locally based self-described “post-rock/instrumental/atmospheric metal” band Seeress has self-released two EPs, 2015’s Self-Titled and 2016’s Many Worlds. The group also contributed a song to the vinyl compilation “Heavy Haze” released by the local record label Wax Mage. The band celebrates the release of its first full-length, Great Void, at tonight's how. Dave Piatek (Above This Fire, Light Years) engineered the album and Brad Boatright (Sleep, Obituary) did the mastering. (Niesel) 8 p.m., $5. Mahall's 20 Lanes.

The Werk Out Competition

Each year, the Werks host a fantastic jam festival in central Ohio and each year the band holds regional competitions to pick up-and-coming bands for the bill. Tonight, Red Rose Panic, Treespeak, Psychic Relic, Ebb n Flow and Coup De Grace will each perform at set in the ballroom, all hoping to get a spot at the Werk Out in early August. This annual rite is always a fun time, and bands tend to pack the house with their adoring fans; there’s a lot on the line here, and the audience has a huge hand in deciding who makes the cut. It’s a B.Y.O.H.H. affair, mind you. (Eric Sandy), 8 p.m., $10. Beachland Ballroom.

When the Iron Maidens, a group that bills itself as the world's only all-female Iron Maiden tribute act, played its first show more than a decade ago, it only knew a few of the British metal act's songs. the group only knew about nine songs. Now, it’s mastered tracks from all eras. Some of those songs even feature different singers as Maiden has gone through numerous lineup changes over the years. The Iron Maidens even include Maiden’s zombie-like mascot Eddie in the live show. Expect the band's first Northeast Ohio appearance to be a blast. (Niesel) 8:30 p.m., $17 ADV, $20 DOS. Beachland Ballroom.

Rust Belters Westside Gunn and Conway may be Eminem’s newest signees to Shady/Interscope, but these two rappers are neither from Detroit nor bushy-tailed newbies. The 30-something brothers (like, they’re actual brothers) perform together as Hall’N’Nash, and are the first rappers out of chilly Buffalo to get inked to a major label. With a sound reminiscent of New York’s boom-bap golden era accompanied by a dose of vivid, gritty street imagery and intricate, weirdo wordplay, Conway’s yin and Westside’s yang are this era’s Raekwon and Ghostface Killah. Named to Complex Magazine’s 2017 Artists to Watch, the pair plans to release projects with iconic New York producers Just Blaze and the Alchemist to continue their underground takeover. In the meantime, give a listen to Westside Gunn’s FLYGOD and Conway’s Reject On Steroids for a taste of their prowess before they grace the Grog stage tonight. (Lawrence Neil), 9 p.m., $15 ADV, $17 DOS. Grog Shop.