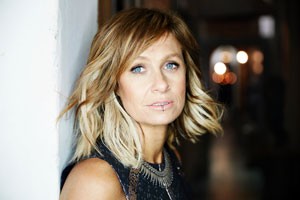 Having spent her formative years in Australia’s desolate outback where she performed with her family’s Dead Ringer Band, singer-songwriter Kasey Chambers didn’t grow up on a heavy diet of popular culture.

So when her father took her to a concert when she was a teenager, it was bound to make an impression.

“My dad took me to see Roseanne Cash play when I was in my teens,” she says via phone from a Seattle tour stop. On tour to promote her new album, Dragonfly, Chambers performs at 8 p.m. on Sunday at the Music Box Supper Club. “I was about 15. I had never heard of this other lady who was playing. She happened to be [singer-songwriter] Lucinda Williams. I didn’t know who she was. She changed my life. I had never heard anything like her. I just wanted to be like her. It was inspiring, and I started writing songs from that point on.”

Chambers made a notable impression of her own with her solo debut, 1999’s The Captain. The album’s simmering title track, a song that strikes a contrast between Chambers’ pretty vocals and a grunge-y guitar riff, became a hit thanks, in part, to its use in a Sopranos episode.

“It was a weird time,” she says when asked about what it was like to see her popularity increase. “I had resigned myself to the fact that playing the kind of music I play wouldn’t result in mainstream success, which is fine. I didn’t mind. I just wanted to play music. ‘The Captain’ was known in Australia, but at first it wasn’t in the mainstream world. It was amazing when Barricades went to No. 1 on the pop charts. It wasn’t even a dream of mine to make it big in music. It was really amazing. Even when I think about it now, I’m like ‘What the hell?’”

When she started writing the tunes for her latest album, Dragonfly, she didn’t intend to write a double album. But because she had songs from two different sessions, it made the most sense to divide them onto two different discs.

“I was always going to do two sessions,” says Chambers. “I had worked together a little bit with [singer-songwriter] Paul Kelly in the past but never with him as a producer. We went in to do that session and then Nash, my brother, and my live band would do a session. We went in the studio and ended up with a lot more songs on both sessions than I thought we would. We couldn’t get rid of any of them. I felt really connected to all of them. They felt like they were as much a part of me as the other one and didn’t blend together as much as I thought they would, so we separated them on the double album.”

The album, which features collaborations with Keith Urban, Ed Sheeran, Paul Kelly, Grizzlee Train, Harry Hookey, Vika and Linda Bull, and Foy Vance, opens with the bluegrass-inflected “Pompeii” but also delvers into pop, alt-country and rock. Chambers really pushes her voice to the max with the soaring power ballad “You Ain’t Worth Suffering For.”

“I just tried out a lot of different approaches to songwriting,” she says. “It’s like therapy to me. I put a lot of focus on my life in some of the songs. I have this other side, and I was writing more story songs. It’s half and half. It’s a lot of my life, and then there are songs that have nothing to do with me, and they come from a totally different point of view. I haven’t done that much of that in the past.”

She says she wrote the song “Romeo and Juliet” with Irish singer-songwriter Vance in mind. The two trade vocals on the somber tune that sounds like the kind of ballad you might hear in a small Irish tavern.

“I thought we could sing harmonies on the song, but it went above and beyond what I thought it would become,” she says. “It went to a whole other level when he became involved with it.”

As much as Dragonfly represents a remarkable achievement in terms of its breadth, Chambers says she won’t emphasize the new songs at the Music Box gig but will play a mix of old and new material.

“I never go out and play all new songs,” she says. “My favorite song every night to play is ‘The Captain.’ In find something new in it every night, and I never get sick of that. I love playing the old ones, and it’s a big part of who I am. I would feel weird if I went out and played too many new songs. And you know what, I remember the lyrics to the old ones more better. I also feel like [the dramatic, Pasty Cline-inspired tune] ‘Ain’t No Little Girl’ is the glue that holds Dragonfly together. It’s a massive part of who I am in my life. I feel just as connected to that song as I do to ‘The Captain.’”