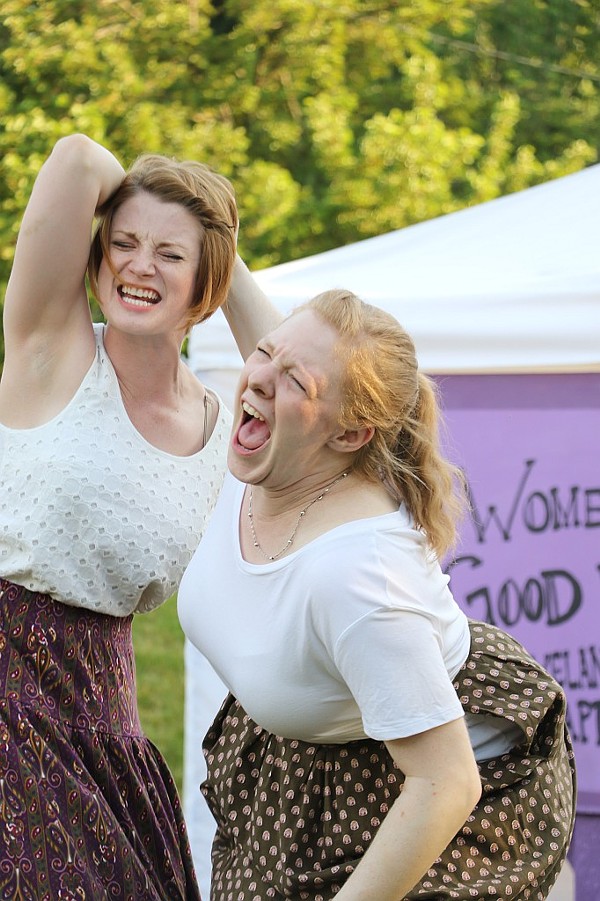 Ever since the original Shakespeare companies used boys and young men to play women’s roles, the layering and twisting of gender has been a substantial part of old Will’s entertainments. But it’s doubtful even The Man himself ever considered having the key men’s roles in The Taming of the Shrew played by women—since the dominant and submissive roles among men and women were so set in stone in the 17th Century. And (ahem) still are, in many ways.

But women do play men in the lively production of Shrew, now touring around Cleveland and Northeast Ohio under the banner of the Cleveland Shakespeare Festival. This hardy troupe, now celebrating their 20th season of presenting free Shakespeare al fresco, has taken this classic play and turned it on its head. As director Lisa Ortenzi notes in the program, “I wanted to see how Shrew would play out if mostly women took on the male roles.”

How does it work? Well, it depends how you look at it. Since women also play the main female characters, the gender switch is only half complete. From one perspective, it’s fascinating to watch capable female actors spout the words of the sexist Petruchio (a boisterous and entirely dominating Kelly Elliot), comical Tranio (Grace Mitri, continually swiveling and posturing), elderly Gremio (Samantha Cocco, adopting an old man’s manner and gait), and blue-balled Hortensio (a coiled and eager Hannah Storch).

But from another perspective, the gender flip can seem a bit of a gimmick, like having women play Felix and Oscar in The Odd Couple. Ever since Sarah Bernhardt played Hamlet in a prose version of that play in 1899, we’ve been intrigued by the idea of women playing men. (God knows we’ve had enough of the reverse). But those examples—Glenn Close playing Captain Hook in Peter Pan along with countless other gals playing Peter himself, Laura Welsh Berg playing the title role in Hamlet in this year’s Great Lakes Theater production—don’t readily come to mind. The reason for that should be the subject for another treatise.

In any case, this CSF production is often witty and quite enjoyable. That is the case, even though actors in a few of the roles need to be zapped with a taser to chill out a bit and consider the value of throwing a line away now and then.

All CSF plays are free, all you have to do is bring a blanket or a low-slung chair and plug into the fun. Their second and final production of the summer, Macbeth, begins July 21. Presumably with a male in the lead role…although you never know.

The Taming of the Shrew
Through July 2 at various outdoor venues, consult the schedule at cleveshakes.com.