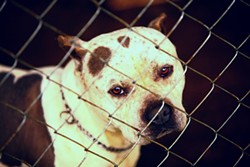 About a decade after the city banned pit bulls within its borders, Lakewood residents are still pushing back against the breed-specific legislation (BSL). There has been near-constant and earnest backlash over the past 10 years, but a renewed and well organized commitment to repealing this law is really taking hold now.

All Breeds Lakewood organized a mass assembly at Monday night's City Council meeting, regaling representatives with stories and context that underscore the callousness of the BSL.

Lakewood resident Jennifer Scott spoke at the meeting, calling the pit bull ban a "racist, classist law." She asked council members to amend the law to conform with Ohio statutes.

Scott adopted a puppy earlier this year, and Lakewood's animal warden reported that "the puppy would be welcome in Lakewood at this time," though there seemed to be a concern that it may be a young pit bull. A DNA test was "recommended," based purely on the dog's appearance. If the DNA test showed that the puppy was more than 50-percent pit bull, the dog would be taken away from her.

"Now there's some special kind of crazy right there," she told council. (She did not submit her puppy to the DNA test.)

When Scott's puppy got loose through an open gate recently, the city scheduled a hearing and mandated a DNA test. With a 30- to 45-day window now on the books, Scott helped rally the Monday night gathering and this latest push against the pit bull ban in Lakewood.

Like many others, we've pointed out before the shortcomings of breed-specific legislation like pit bull bans. The black-and-white policies leave little room for case-by-case discretion, instead describing an entire group of dogs as guilty until proven innocent. This is obviously problematic for families who rescue and adopt pit bulls and for trainers who work with a broad spectrum of dogs.

Former Lakewood resident Kerry Stack, a dog trainer herself, organized All Breeds Lakewood last summer in an effort to reduce the stigma around pit bulls in the city. Embedded in BSL, Stack said at last night's council meeting, there is an inherent and "sinister" theme. "We believe it has not been designed for the safety of our citizens," she said, "but rather as a racial and socioeconomic profiling that has blemished Lakewood's claim to being an all-inclusive diverse city."

Stack promised ongoing action from All Breeds Lakewood. In a phone call with Scene today, she said that All Breeds will be taking it upon themselves to "fill in some of the voids that council and the mayor have failed to fill in, such as education and resources." All Breeds' blog boasts training materials and points out that there's much more at work here than simply repealing a law; there are leash laws and dogs-at-large laws that can be strengthened in a city as densely populated as Lakewood. She advocated a "holistic" approach to dog policies, something that, more and more, cities and courts are starting to recognize.

Earlier this year, the Fifth District Court of Appeals in Ohio struck down an anti-pit bull law in Reynoldsburg, Ohio (near Columbus). As ASPCA leadership stated in April: "This victory should generate important momentum against BSL in Ohio: Absent review and reversal by the Ohio Supreme Court, the more than 80 municipalities in Ohio with breed-discriminatory ordinances still on the books now face the choice of either repealing them or defending them in court—with the law stacked against them."

The city of Reynoldsburg did not fight back against the ruling, signaling a solid win for pit bull advocates.

The Fifth District decision covers 15 counties. Legal precedent assumes that if some sort of litigation were to develop in the Eighth District (Cuyahoga County), the court would rule similarly.

Until then, however, All Breeds and the many supporters of equitable policies in Lakewood will continue to keep this conversation in council chambers and at public events.