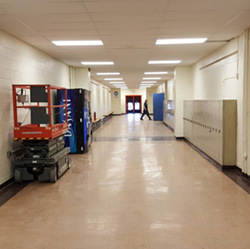 The five Ellet High School students who were charged in March for pasting a swastika and racial slur on a locker room door have penned a court-ordered apology letter.

"We thought it was a joke but obviously it wasn't," the letter reads. "By being reminded of what all of the things we said we are reminded that racism, slavery, and anti-semitic views are still somehow affecting everyone today."

The students were charged with misdemeanor criminal mischief and ethnic intimidation. In March, Akron Public Schools Board of Education President Patrick Bravo said the Board would also discipline the high-schoolers, to "send a strong message to the entire community about this kind of behavior."

"It is essential that all our young people feel welcome, valued and safe in this city and in their school environment," said Horrigan. "Our diversity is our strength; and acts like this, intended to divide us or incite fear, will never be tolerated in Akron."

The students concluded their collective apology letter with this paragraph:

"From this point on we will always think before we speak and do. We will always make sure our actions are positive. If we see someone using hate speech toward an individual we will make sure to speak up and defend that individual. If someone does try and do something related to this issue in a way, we will try to warn them of the punishment that comes with it and how it will affect them. So please if you are willing to find a way to forgive us five who have done this, it would be much appreciated."

They taped the swastika and racial slur on the Ellet basketball team's locker room door, where it remained for about an hour before being removed.

Video surveillance contributed to the identification of the students.

"They didn't just attack the black players, they attacked the whole team and that is something we'll use as motivation," Assistant Coach Monta Smith told Cleveland 19 News, as well as his team. "But don't let the actions of some of the lesser, ignorant people deter you from going forward and being successful. We'll get through this."