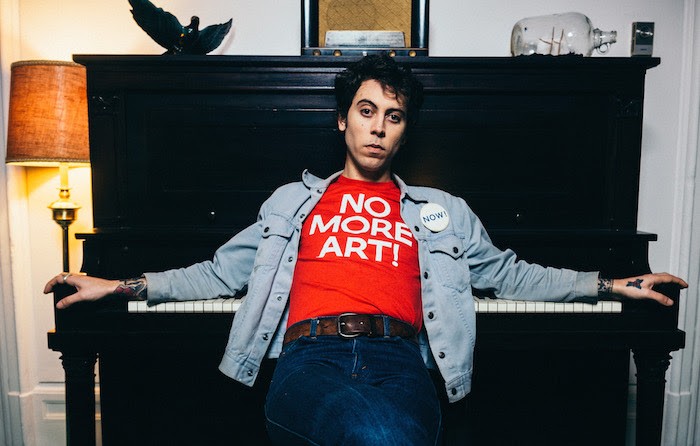 Canadian singer-songwriter Daniel Romano plays a variety of different instruments, but he possesses an unusual affection for drums.

Romano made his stage debut at the age of 8 while playing drums in his family’s R&B band.

“I wasn’t allowed to be in the bar when we weren’t performing, so I spent a lot of time drinking ginger ale and hanging out with the kitchen staff,” he says via phone from a Lancaster, Pennsylvania tour stop. He performs on July 1 at the Beachland Tavern. “I didn’t think much about it at the time, but it showed me the simple enjoyment of performing music and probably rhythm, to some degree.”

Once he left his family's band behind, he formed the punk rock group Attack in Black simply because “it was the easiest style of music to write and play.”

“[Punk rock] was also what I wanted to be writing,” he says. “I have always been a student of music and back then there’s a certain amount of head nodding and copying and emulation that you have to go through to get your bearings and figure out how it’s done.”

Romano admits a certain restlessness has made him switch musical gears throughout his career. He issued a “folk rock record” with Attack in Black and began to play the kind of alt-country approach that musical friends such as Ron Sexsmith and the Sadies have embraced.

“We wanted to diversify immediately, so we made a stripped down record much to the chagrin of the label,” he says. “They appreciate it now. We just wanted to make different records all the time. We liked all kinds of music, and we didn’t want to be put in a box. They didn’t really know what to do with us. Things became difficult relationship-wise. Not that it is now. It’s all fine now between us and them. Not getting stuck anywhere has always been very important to me. That’s kind of how I wound up doing something different.”

Since releasing 2009's Daniel, Fred & Julie, he’s put his punk rock predilections on the back burner. His latest effort, Modern Pressure, sounds like Dylan after he went electric. The album features dynamic horns and nasally vocals that give it a retro feel. With its whirring guitar riff, album opener "Ugly Human Heart, Pt. 1" has a "Rainy Day Woman #12 and #35" vibe. A bit of organ brings a soulful vibe to the bluesy "The Pride of Queens," and the narrative driven "The Impossible Green" sounds like something the Band might've played in the '60s.

Romano recorded at a minimalistic cabin in secluded Finnsäs, Sweden with additional string and horn players laying down their parts at Baldwin Street Sound in Toronto.

“I didn’t have a set musical vision for the album,” he says. “It was pretty song-based. I knew I wanted it to be drum-centric. Beyond that, I didn’t have a sound in mind, other than for the drums, which builds an album more than you think. Drums are importantly sonically to what is going to work. I did all the drum tracks first, as I usually do. That lent itself to whatever it sounds like now.”

To accentuate the vintage sound, Romano recorded onto an eight-track cassette player.

“It was crazy,” he says. “It was just me and the engineer hunkered down. It was really great. We would get a little loopy.”

“I Tried to Hold the World (in My Mouth)” comes off as a trippy, psychedelic rocker on par with anything from the late '60s or early '70s.

“I have no idea what inspired the song,” Romano says. “A lot of these things make sense at the time, and then I lose touch with them, and they hopefully gain some other conscious beyond their conception. I think that’s the goal of the song, really. I’m sure it was very specific at one point or another.”

While Romano doesn't have a horn or string section on tour with him, he says his backing band is more than capable of bringing the Modern Pressure tunes to life.

“It’s a five-piece rock band that I play with,” he says. “We have two electric guitars and bass, drums and organ. It’s been really fun to play these songs. I’ve never been one to emulate a recording. The live show is its own entity for me. I don’t really revisit albums. I just revisit songs and however that suits a live setting best. That constantly evolves too.”