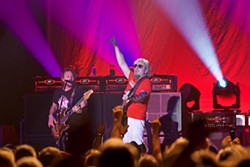 Sammy Hagar and the Circle’s show at the Hard Rock Rocksino has been sold out for months — something that could partially be attributed to the fact that it’s been nearly a decade since Hagar played his last full-length solo show here.

But then again, whether it’s been 10 years or a couple of weeks, you can always count on his fans (“redheads,” as they’re affectionately known) to show up in droves. As the lights dimmed, a video montage showcasing Hagar’s “Four Decades of Rock” quickly demonstrated just how many miles he’s traveled since his humble early beginnings in the San Francisco area in the early ‘70s. You can see a slideshow of photos from the concert here.

The Montrose staple “Rock Candy” (especially with the vintage ‘70s video of the band running in the background) was just one of many setlist highlights from last night's 100-minute performance. In addition to Hagar, the band also included bassist Michael Anthony, drummer Jason Bonham and guitarist Vic Johnson.

The 15-song set kept things focused heavily on the hits — powered by the thunderous thud of Bonham’s drumming, which added a shade of Led Zeppelin to the evening’s material right from the get go, opening up with Hagar’s “There’s Only One Way To Rock,” from 1981’s Standing Hampton. The first dip into the Van Halen years came next with “Poundcake” from 1991’s For Unlawful Carnal Knowledge and they quickly established the third part of the evening’s catalog, turning out a raucous version of Led Zeppelin’s “Good Times, Bad Times.”

From there, they would jump around eras throughout the evening. “I know everyone has seen one of us somewhere here in life,” Hagar quipped midway through the set. “It would be impossible not to.” Naming off the various bands they had all been associated with, he said, “That’s what this band does — we play all of that shit.”

Here’s the thing: Hagar will be 70 years old in October. And early on in the setlist, while his voice showed some of the age and necessary key adjustments, one couldn’t deny that he still is singing better than many of his peers who are at a similar age and point in their career.

In fact, his vocals only got stronger as the set progressed and he sang Led Zeppelin’s “When The Levee Breaks” late in the show with plenty of fire, also handling the bulk of the lead guitar work on that particular track. He traded licks with Johnson, who as he has pointed out in interviews, has the unenviable task in this band of having to fill the shoes of three major guitar players — Eddie Van Halen, Jimmy Page and Joe Satriani. When Johnson first joined forces with Hagar in 1997, it was enough of a challenge for him to take on all of those classic Van Halen riffs and in the 20 years that have followed, he’s done an admirable job of tastefully navigating the many different eras of Hagar’s catalog.

During Hagar’s signature “I Can’t Drive 55,” one of the first big crowd sing-alongs of the night, it was Michael Anthony who stepped up to the mic at the midway point of the song to take one of the verses, ad-libbing, “Cleveland, it took us 16 hours to drive through the birthplace of rock and roll to play!” As was the case during their time together in Van Halen, the chemistry (and vocals) that Hagar and Anthony share on stage is still one of the most infectious things to watch as a music fan — and Anthony remains one of rock and roll’s coolest looking bass players — one who brings plenty to the stage with his vocals and his playing, but also just with the good vibe that he adds simply with his presence. Fingers crossed that rumors of a Van Halen 40th anniversary tour next year with both Hagar and Anthony back in the fold actually might play out and turn to truth.

The band’s set closed out with both “Heavy Metal” (“headbangers in leather!”) and a humorous update on Hagar’s “Mas Tequila,” cleverly retitled as “Mas Mezquila,” a not so subtle nod to his latest alcohol-related venture, Santos Mezquila, a mezcal/blue agave tequila mashup that he recently launched with friend Adam Levine from Maroon Five.

The two-song encore brought out two final heavy hitters, Van Halen’s “When It’s Love” and Led Zeppelin’s “Rock and Roll” and, as the crowd response revealed long after the house lights had come up, they would have happily taken plenty more songs. Hopefully, Hagar and the Circle won’t wait too long for a return engagement.