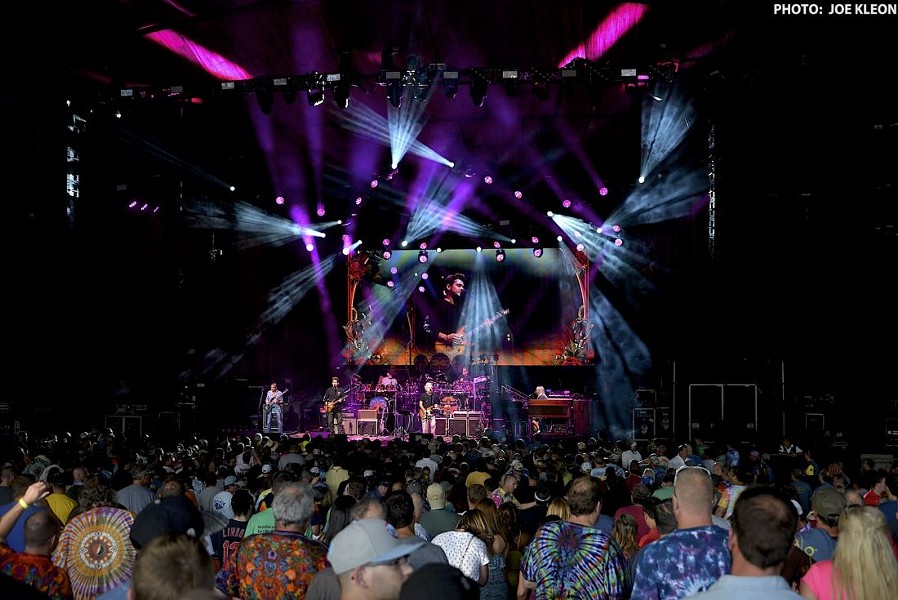 The hype for this summer tour has been steadily growing, and it crystallized earlier this week when Dead & Co.'s Blossom show sold out. People frantically searched for tickets among friends and planned last-ditch attempts to get down to what was shaping up to a be a special late-June show.

Getting there was an absolute odyssey, the likes of which I've never seen on the way to Blossom. I joined a bus from Lakewood, and it took about two and a half hours of excitable anticipation to arrive at the lot. By the time we landed, Google Maps still showed a glaring red snake of bumper-to-bumper traffic all the way back to I-77. Here's the thing: When this incarnation of the Dead makes its first stop in Northeast Ohio after a few years of touring, you're not going to want to miss out.

(See a photo slideshow of the concert here.)

I got in as the band was grooving nicely on Mississippi Half-Step Uptown Toodeloo, with Bob Weir howling into the slowly setting sun. As the crowd made its way into and across the lawn, the band worked through a gentle Row Jimmy (with excellent lead work from your new pal John Mayer) and a sterling cover of Johnny Cash's Big River.

All the talk revolves around Mayer, sure, but it's gotta be said that often enough keys man Jeff Chimenti is stealing the show. When he took the lead, it was terrific, but his most vital talents lie in the flourishes, the washes that take the hand of a particular jam segment and push it further.

During setbreak, we were treated to a commercial for the new documentary Long Strange Trip. It was an odd moment, because it came off like some sort of management decision to pierce the veil and take us all out of reverie for a spell. Of course, the documentary has been the talk of the town lately, so it's not like this was the wrong audience, but the corporate wink felt more unsettling than it needed to.

That super long setbreak gave way to a second set that touched on all corners of the Dead sound that people know and love. China Cat Sunflower > I Know You Rider kicked things off real nicely, with all members of the band working real well together to take the jams in a good variety of directions.

The highlight, no doubt, was Truckin', which featured a spellbinding jam that dissolved into roving, spacey melodies. It was futuristic Dead. Mayer and Chimenti were bouncing off each other, pushing the jam into really wild territory. As this band finds itself (and hopefully continues to tour), one can only imagine that jams like this Truckin' outro will become more and more prevalent.

Drums > Space did its thing, with Mickey Hart playing around on some of his toys (was there a kazoo in there, or was it just me?). It sounded like Weir ripcorded the band into I Need a Miracle, which was maybe the one scene of unsteady footing all night. Wharf Rat into Good Lovin' capped a high-energy set.

But it was the encore where, once again, we were reminded that Mayer is taking the mantle of this music and running with it headlong into the years ahead. He's earned his stripes, and you'd be hard-pressed to find a fan who'd deny that.

There was something I was thinking about last night, a quote from Weir. He was talking last year about this band's story, about what comes next. It's haunting and elegiac, and it sums up the whole point of the Dead & Co. shows. Time rolls on, sure, but we're still here. Last night's show might be the only one that people are catching this year, or it might not be, but it offered a timeless vestige for those of us who love good music and the company of excellent people.

“I looked over at John, and it was 20 years later," Weir said. "And John was almost fully gray. I looked over at Oteil and his hair was white. I looked over to my left and Jeff’s hair was all gray. Looked back at the drummers, and it was a couple of new guys, younger guys, doing a great job. I looked back at the back of my head, and it was some kid in his twenties, delivering with fire and aplomb. And then that same vision came back to me later that night in a dream. I came out of a dream, woke up having seen that same thing, only in greater detail. And it changed my whole view of what it is that we’re up to.”