Tom McIntyre has had his eye on Stand H14 at the West Side Market for years. Located in the northeast corner of the market, Dani’s Seafood has been an ambition of his ever since he began working for his mother, Kate, while he was still in high school. Now, as the proprietor of Kate’s Fish, McIntyre finally has gotten his wish. He recently purchased the business and has ambitious plans to completely rework the space and business.

Kate McIntyre launched Kate’s Fish (Stands F12, F13) in 2001, expanding the business both figuratively and literally when she grew into the adjacent wraparound stall. While Tom worked at Kate’s on and off over the years, it wasn’t until 2008 that he fully committed himself to the business of selling fish.

“My mom had built up a nice little business, but she was in trouble, behind on invoices, and she was thinking of selling the business,” Tom recalls. “I said, ‘You’re not selling the company; I’m moving home.’”

Since coming back, McIntyre has increasingly taken on more and more responsibility, juggling the jobs of principal fish cutter and company manager. One of the first things he began doing was forging new relationships with better wholesale suppliers. 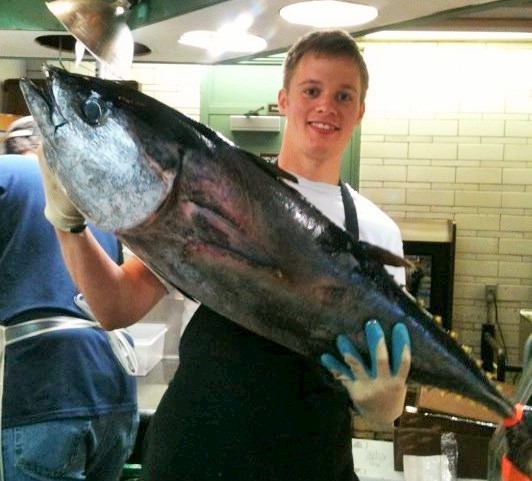 “In the beginning, we never really thought about buying direct, which is the same way the local wholesalers buy it – off a truck out of Boston, Florida or Virginia, or you get stuff flown in from Alaska, Hawaii or Seattle,” McIntyre explains. “They don’t want to deal with a small company or a company that doesn’t have credit. It’s been a long, long process, but once we started buying direct, it opened up a whole new world of products that we can bring in.”

It’s not just the variety of products, he adds, but the quality of those products.

“Seafood is a ticking clock; the product is going bad before you even get it,” he says. “By buying whole fish instead of buying fileted fish you can check the freshness of the fish. Are the gills red? Are the eyes clear? Is it shiny? You can’t tell that from looking at a skinless filet.”

As any loyal customer of Kate’s Fish well knows, the quality and variety of the products on display in the coolers has continually improved each and every year, and it evolves with the seasons just as local produce does. Spring ushers in soft shell crabs from Chesapeake Bay and halibut cheeks from Alaska, which are followed by wild salmon from the Pacific Northwest and walleye from the Great Lakes. Then come the stone crab claws from Florida, live lobsters from Maine, and sweet bay scallops from Nantucket.

“We are always trying to expand our product line, but there’s only so much room in the case,” he says.

In addition to the raw fish and seafood, Kate’s has been steadily adding more prepared foods like smoked salmon, seafood salads, bouillabaisse, and cook-and-eat crab cakes. The reasoning behind products like those are two-fold: it’s what any smart chef does to add value to an ingredient, but it’s also a reaction to an evolving customer base.

“The market has gone on this crazy roller coaster ride for the last 16 years and through it all, we’ve built up this business,” he explains. “We’ve seen the grocery-shopping crowd turn into a tourist crowd on the weekends. You’ve got to get creative and change with the times. The weekend crowd is not coming in to buy 20 steaks to take home and freeze. They very much want to experience the neighborhood. They want to eat something. Prepared foods like pastries, crepes, gyros, falafel are killing it.”

Dani’s Seafood – what many people derogatorily refer to as the “stinky fish place” – has been around since 2002. But that corner space has been a fish market ever since the West Side Market opened in 1912. The space is much larger than it appears owing to a wall of walk-in coolers, which McIntyre plans to remove during a gut renovation of the space that, in the end, will net him a full kitchen, a market perk reserved for corner spots.

“I want to change the way people think about seafood in this town,” he explains. “I want to make really good seafood approachable and affordable. Growing up, we always went to the shore for summer vacation and to me, good seafood is fresh, casual, low-key food.”

“You name it; the possibilities are limitless.” he says.

McIntyre is more than comfortable investing in a 105-year-old public market that often is the butt of criticism from both shoppers and vendors. And rightly so. The city-run structure needs constant attention and improvements, and nearby parking lots have been commandeered by pleasure seekers bound for boozy W. 25th Street.

For all the naysayers, McIntyre offers some pretty sage advice.

“The market isn’t perfect; it needs a little TLC, but we had a record year last year,” he says. “For too many vendors the mindset has always been cheap, cheap, cheap. Do you see the kinds of people who are coming through there now? Differentiate yourself: sell Prime beef, sell grass-fed beef, sell pork that isn’t coming from Daisyfield, don’t sell 5-dollar flats of rotten strawberries. If you’re selling a good product, people will come to you.”

Look for the as-yet-unnamed project to open in early 2018.