Summer Begins in Cleveland With Shootout at Bump Taylor Field, and Calls for Change Ring Out in Glenville

In early June, Plain Dealer reporter Rachel Dissell published an important story that touches the very nerve of what it’s like to live in one Cleveland, while at the same time another Cleveland debated just how quickly we ought to shuffle tax revenue from the city’s general fund into a sprawling sports arena renovation job. In Dissell’s story, there’s nothing glitzy on the horizon for Cleveland.

There already has been. And, even short of the all-out specter of murder, shootings take on a clockwork rhythm as the summer settles in. Just hours before writing this, on the morning of June 29, a 24-year-old woman was shot on Holborn Avenue, in the East 120s. An 18-year-old man was shot on Grovewood Avenue, in North Collinwood.

It’s one of the primary problems in Cleveland: Gunfire crackles like July Fourth fireworks, and children are raised to know its proximity.

On June 21, a high school football team was practicing under the eye of Coach Ted Ginn Sr. at Robert “Bump” Taylor Field in Glenville. The football field is one of five that the Cleveland Browns Foundation revamped with synthetic turf and a scoreboard last year. The point of the project was to give back to the city, to support the youth, to “unify local communities.”

It was terribly on cue: The solstice was slowly drifting into a bright, sunny evening. Summer had arrived, and with it came a barrage of bullets on Thornhill Drive, adjacent to the field.

Alanda Sales-Clark was watching her son on the field. Her sister had joined her. When the explosive gunshots popped across the parking lot, they dropped to the ground.

“Shots rang out. It was like the wild, wild west,” she recalls. “Anywhere between 10 and 15 rounds were let off. Shots fired and returned. It was like a scene out of a horror movie.” One of the guys involved in the shooting ran past Sales-Clark, tearing through the parking lot and fleeing into the neighborhood. The whole thing happened in an instant. No one called 9-1-1.

Sales-Clark’s son ran off the field, dashing into the car with his mother and aunt before zooming out of there. The the week that followed, he hasn’t been at practice. The team continued on, but he’s not the only boy to have taken a moment to steer clear of the scene. Ginn’s leadership and reputation in the community are unparalleled, and now he once again finds himself in at the nexus of events shaping young men’s lives in Cleveland. With the Bump Taylor shootout as an unfortunate platform, he joins vocal leaders from around the city in calling for a new, more engaged environment as violence creeps steadily around every street corner. Sales-Clark, who also works at Ginn Academy, is organizing a response before the fears described in Dissell’s early summer story are realized en masse.

“It needs to end,” Sales-Clark says. “We want to shed light on what’s going on. I don’t want this to be woe-is-me, you know, we rally and there’s nothing else to do.” She and many others in town are tired of the sights of balloons and teddy bears strapped to telephone poles on residential streets. No one was injured at the Bump Taylor Field shootout, but the precipice had drawn close. Part of the problem is that it’s often hard to know what to do between the vigils, in the spaces between the funerals. 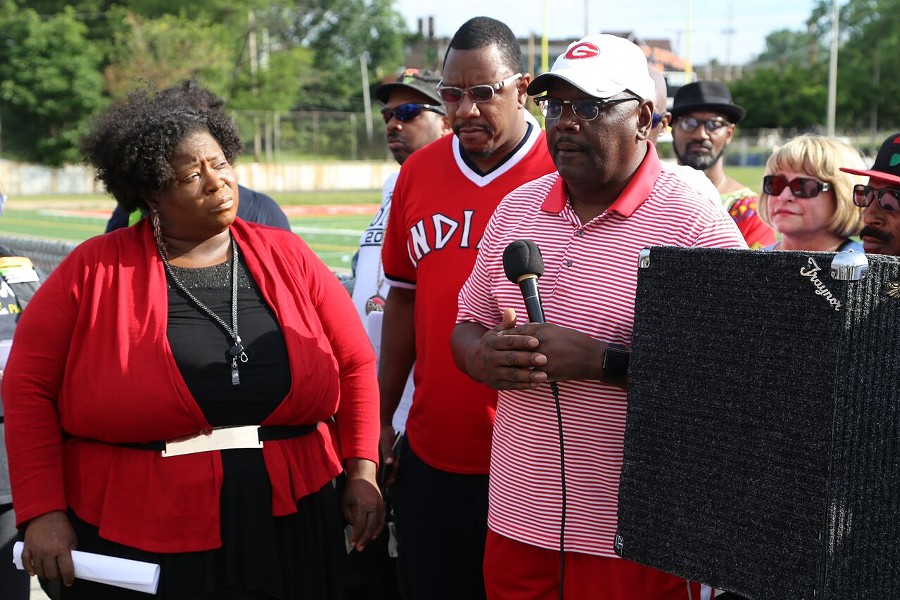 Yesterday, under another sunny Cleveland sky, a crowd gathered at Bump Taylor Field as the boys wrapped up their practice. The underlying message was a holistic one, pleading with men — young fathers, in particular — who have already passed through the dangers of an adolescence amid omnipresent gun violence to use their influence on the generation coming up now. The onus on active involvement paired naturally with Ginn’s football program. Keep kids busy and keep them around positive environments, because the otherwise the “game” of guns threatens to pull them in.

“This was the beginning of getting solutions and getting people actively involved in their community,” Sales-Clark says.

On Saturday, members of local organizations and gangs will come together to talk about on-the-ground solutions. On one hand, the tone of this week's events has been one of renewed commitment, but no one attending the meeting and no one who came out last night is new to this discussion. The "hot, dangerous summer" has happened before.