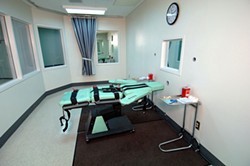 In an 8-6 vote, the U.S. Court of Appeals for the Sixth Circuit granted Ohio its right to execute prisoners with a controversial three-drug process that includes the sedative midazolam. The protocol was ruled unconstitutional in January.

By all accounts, the execution of Ronald Phillips, a lead plaintiff in this case, may remain scheduled for July 26. Three other inmates are also on the calendar for 2017. (Phillips is expected to try his hand with the U.S. Supreme Court.)

Recall that a pivotal piece of background information in this circuitous court case is the dubious 2014 execution of Dennis McGuire. He gasped and snorted audibly and took more than 15 minutes to die once the drugs were injected, once again placing scrutiny on how Ohio was carrying out its executions. State policy has been remarkably wishy-washy on how it means to carry out executions ever since.

When Ohio announced last fall that it would return to its three-drug “cocktail,” as it’s so often described, observers were taken aback.

"Having thus pursued a lengthy, multi-front campaign for compelled secrecy premised on their need to acquire pentobarbital and/or sodium thiopental, [state leaders] have now made clear that they didn’t mean anything they said," Phillips’ attorneys argued. He alleges that the known properties of midazolam and the state's history make it so that executions cannot be carried out in a constitutional manner. "There are no safeguards—training, IVs, etc.—that can cure this fundamental problem."

A jury trial was requested. The appeals court will not let it get that far.