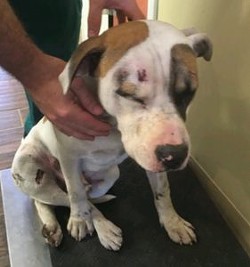 Indiana Bones' life has been rife with chaos, but that's about to change.

After being hit by a car and badly beaten, the pit bull puppy was found and taken by Cleveland Police to a veterinary clinic on March 9. He was later transferred to the Cleveland Animal Protective League (APL).

"From the medical side of things, we have access to unique resources at our office, and we knew we could provide him with a really thorough recovery," Sivula told The Plain Dealer. "But beyond that it was love at first sight and we wanted to spoil him for the rest of his years and make up for what he has been through. A lot of folks have said how kind it was for us to adopt him, but we feel like we're the lucky ones to have him in our lives."

The puppy has since been assimilating to the Sivula family, joining their cats and helping them cope with the recent loss of their Greyhound.

Indy also joins his new family often at Dancing Paws, and is a frequent visitor to classes Stephanie teaches at Lakeland Community College.

He will be officially adopted in July, after he undergoes one more surgery. The Cleveland APL is still on the hunt for the three men caught beating Indy, offering $4,000 to anyone with information; you can call their hotline at (216)-377-1630.