So Many Fresh Kyrie 3 Colorways to Choose From This Summer 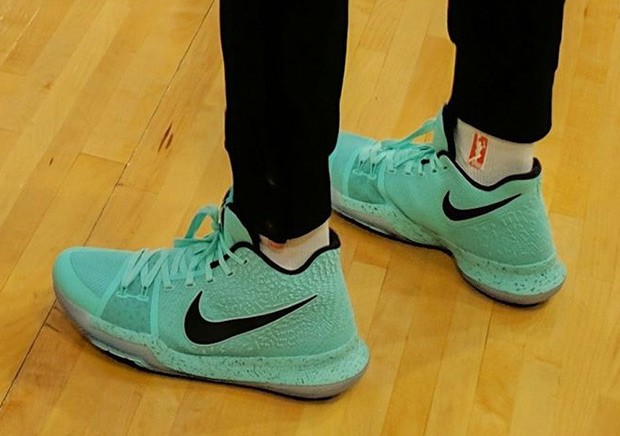 For those trying to look fly in a new pair of sneakers this summer, Cleveland Cavaliers star point guard Kyrie Irving has you covered with a bunch of new colorways of his Kyrie 3 line from Nike debuting all season long.

First up, on July 14th, this ‘Mac and Cheese’ colorway will release for kids only, in an appropriately colored yellow with some hints of blue throughout. This isn't Irving's first toe into kids-only shoe territory, his Kyrie 2 ‘School Bus’ colorway was another favorite.


Then, on July 15th, our favorite Kyrie 3 of the summer will drop: the ‘Aqua’ colorway, which are mostly aqua/turquoise throughout, with a black swoosh and a speckled sole.

About a week later, on July 21st, two related colorways will come out, both black and white themed, and they’re kind of the opposite of each other. The black sneaker, with white accents will be called ‘The Tuxedo’, while the white with black accents is appropriately titled, ‘Cookies and Cream’.


A ‘Triple Black’ or all black colorway will drop August 5th in what appears to be the only colorway scheduled for release in August as of right now.

another one of our favorites,

the ‘Kyrachie Light’ will drop some time in September, perfect for those back to school kicks you’ve been looking for. This is the second time Nike has made a Kyrie sneaker inspired by the Air Huarache, one of Nike’s original sneakers, as there was also a Huarache colorway of the Kyrie 2.

Another colorway that Kyrie himself posted on his Instagram account, with the caption, “Woman empowered, Tiffany’s inspired,” should be set to release at some point as well, as a possible women’s-only release. Irving is a fan of skateboarding and this colorway was clearly influenced by one of the most popular Nike SB Dunk’s of all-time, the ‘Tiffany Dunk’. The Nike SB Dunk is Nike’s signature sneaker for skateboarders.


With a (relatively) low price point for a signature Nike sneaker, at $120, the Kyrie 3 has been selling like crazy, and is currently the best selling performance basketball sneaker (Jordan’s don’t count, as most Jordan’s are not for actually hooping.) These new colorways should help the popularity of the sneaker continue until the Kyrie 4 is inevitably released next year.