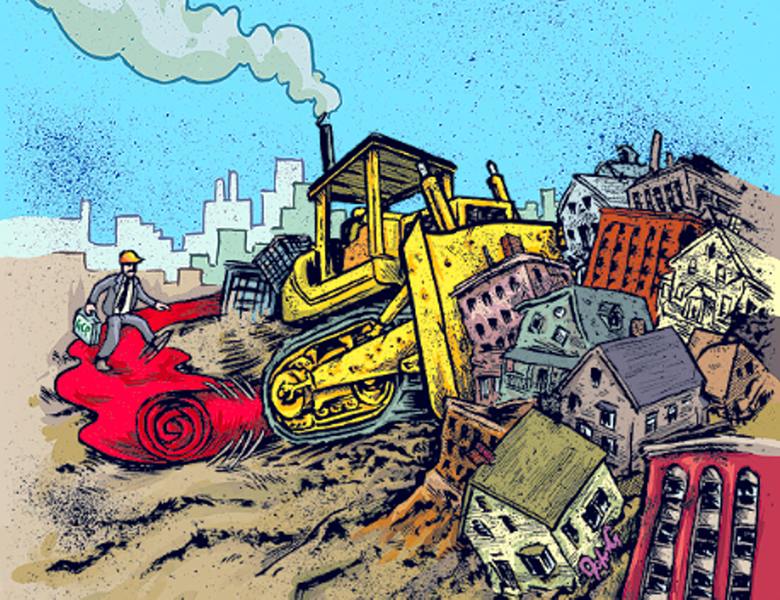 The state insists that a Cuyahoga County taxpayer's lawsuit is holding up construction of the Opportunity Corridor, the $331.3-million boulevard that will connect I-490 to University Circle. The lawsuit strikes at the funding mechanism for the Opp Corr, by arguing the constitutionality of the Ohio Turnpike raising tolls and then using that revenue to fund non-Turnpike projects (like the Opportunity Corridor). Resident and plaintiff Melissa Ullmo calls the toll increase and appropriation an "unlawful tax" on Turnpike users.

The problem is as labyrinthine as everything else related to the Opportunity Corridor.

The first two phases of the boulevard, which extend from East 105th and Chester down to East 93rd Street, are on track for timely completion by the end of next year. The third phase, which brings the roadway down to I-490 at East 55th, is going to take much longer. That phase will have to be split into multiple parts; it also constitutes the biggest chunk of the project's cost: some $220 million of the grand $331.3-million total.

While the whole thing was supposed to be finished by 2020, that's not likely to happen at this point.

The third phase was supposed to be funded by the next round of bonds issued by the Ohio Turnpike, under its recently granted toll-spending authority, according to ODOT press secretary Matt Bruning. "Instead of using another round of turnpike bonds, we're going to use state revenues that come from our fuel tax," Bruning tells Scene. The fuel tax is a more finite resource, he adds, which means that construction will need to be drawn out on a longer timeline compared to the Turnpike bond structure. "It's Plan B," he says.

Here's the legal background on Plan A:

Beginning in 2014, the Turnpike embarked on an annual 2.7-percent increase in its tolls for trips over 30 miles, which will last through 2023 and which was authorized by the state's General Assembly. The additional revenue will pay for some $1 billion in bonds issued by the Turnpike in 2013. That money is helping to fund infrastructure projects around the state, including Cleveland's Opportunity Corridor. It was widely celebrated at the Statehouse as a unique take on revenue generation and widely derided as a questionable work-around elsewhere.

Cuyahoga County resident Melissa Ullmo filed a multifaceted lawsuit in 2015, arguing that the toll increase has been used as an unlawful tax to fund projects that have nothing to do with the Turnpike.

U.S. District Judge Dan Polster tossed most of the lawsuit a few months later, but allowed Ullmo to continue arguing that the Turnpike toll increased constituted an unlawful tax on face value. The case was kicked back to Cuyahoga County at that point, where it has more or less languished.

Ullmo argued that the 2014 toll increase was "not designed to offset a liability owed by the Turnpike users ..." In short, Ullmo is saying that there was never any Turnpike-specific need for the toll increase three years ago, and in the absence of a need the revenue was directed toward non-Turnpike uses. Where a toll was once a fee, she asserts, it's now become a tax.

Polster, in his 2015 opinion on the case, wrote that Ullmo never fully articulated that the Turnpike tolls and these non-Turnpike projects are materially unrelated. This is where things get a bit esoteric.

According to the Ohio Revised Code Sec. 5537.18, toll revenue may be used for non-Turnpike projects that have a "transportation-related nexus" with the Turnpike in several ways: decreasing Turnpike congestion, impacting the "movement of goods" or the generation of toll revenue on the Turnpike, enhancing the access to or egress from the Turnpike and having a general physical proximity to the Turnpike (some portion of the non-Turnpike project must be within 75 miles of the Turnpike). It's the Ohio Turnpike and Infrastructure Commission itself that both determines that a project has a related Turnpike "nexus" and then decides to fund it. Words like "impact" and "enhancement" are not further defined.

That provision was added to the Turnpike section of the Ohio Revised Code in July 2013, mere months before the toll increase went into effect. The two events were intrinsically connected. This is the cornerstone of the new Innerbelt Bridge funding and the Opportunity Corridor funding, along with millions of dollars in infrastructure improvements statewide. ("A lot of the projects that we were able to do with that money we were able to accelerate 10, 15, 20 years," Bruning says.)

The court, however, has danced around Ullmo's core argument, insisting that "The General Assembly has expressly stated that Turnpike tolls are not taxes." The case boils down almost entirely to semantics on that point. It's a "Because I said so" sort of argument, and little has been hashed out beyond that in the courtroom.

"In general, a fee that is used primarily to benefit the person paying the fee is not tax, while fee that provides the same benefits to people who never pay the fee, as it does to those who pay the fee, is tax," the court writes. "Here, the General Assembly prepared list of criteria for infrastructure projects at R.C. 5537.18. Those criteria, which are focused on the benefits to Turnpike users from infrastructure projects, support the conclusion that the General Assembly intended for the increased toll to be fees, not taxes."


Because it's fairly easy to imagine a commuter using the Opportunity Corridor in the distant future — and, perhaps, never setting tire to asphalt on the Ohio Turnpike, thus never paying tolls — it's not much of a logical leap to argue that the toll increase and its expenditure is a tax. Two years in on this lawsuit, and that central question is still being debated.

Douglas Hedrick, chief engineer for the Turnpike Commission, said in 2013 that "I-490 via I-77 connects to the Ohio Turnpike and will encourage use of the turnpike, particularly by those who are traveling further distances to get to this major institutional center. Therefore, the [Opportunity Corridor] project has a nexus to the turnpike system.”

That's where the argument rests right now, but nowhere in Poster's 2015 opinion did he halt the diversion of toll revenue to projects like the Opportunity Corridor. It's unclear how or why the lawsuit could be holding up the funding apparatus for the project.

Patrick Perotti, an attorney representing Ullmo, tells Scene, "We haven't seen anything about [ODOT] announcing any kind of delay. If ODOT is claiming that there's something in the lawsuit that is tying them up, that is simply a lie. ... We'd like to obtain some information from [the Turnpike Commission], and every time we do that they ask the court to prevent discovery."

Bruning as well could not elaborate on how specifically the lawsuit is holding up the funding structure, except to say that "It became evident to us (ODOT) that there's been no movement [on the court docket]. We can't risk not getting things done, so we have to shift our plan and keep moving forward. We remain committed to this project. We are not going to let this project not get done."

The latest action in Ullmo's suit came last December, when she opposed Attorney General Mike DeWine's motion to dismiss the case. "Our country was founded, in part, on opposition to improper taxation," she wrote by way of intro.

Until the court arrives at a resolution, the Ohio Turnpike seems limited in an ipso facto sort of way in its ability to issue bonds. ODOT isn't venturing a guess as to when the Opportunity Corridor itself will be done, though Bruning did tell Cleveland.com that "it won't be 20 years, it will be much shorter than that," referencing the protracted Innerbelt corridor timeline.

All of that being said, we'll point you now to our tongue-in-cheek 2021 prediction on the Opportunity Corridor, published last year, which is now creeping slowly into reality.