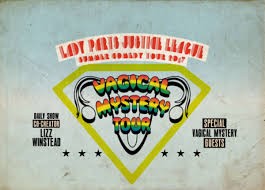 Winstead and a panel consisting of Alonzo Boden, Frank Conniff and Sharron Paul, added satirical commentary during the various speeches.

The event provided a scathingly funny critique of the man who would defy all odds (and logic) to become the country's president.

Wintead returns to town tonight with Lady Parts Justice League, an organization that aims to expose "sexist anti-choice extremists." On a tour dubbed the Vagical Mystery Comedy Tour, Winstead performs at 7 at Mahall's 20 Lanes in Lakewood.