Pitchfork returned to Chicago's Union Park this past weekend for its annual summer music festival, and we were there to experience it all.

The music website's festival has evolved a lot since its early heavy indie-rock leaning origins, and the lineup reflected the change with an eclectic mix of up-and-coming artists spanning multiple genres. In the past, they have prided themselves on booking acts before they blow up, but this year might have been one of the most established lineups yet, with three-day passes selling out before the festival took place.

Friday was arguably the biggest day of the festival, and it was immediately apparent stepping off the train into a never-ending line just to get into the festival. The only way to get in was to cut. In my four years attending, I have never seen anything like it. My assumption was most people were there for LCD Soundsystem, a band that's been playing shows like crazy ever since reuniting from that five  “break up," and Pitchfork always reviewed favorably.

I got into the festival just in time to catch Vince Staples’ high energy set, playing mostly tracks off his latest release, Big Fish Theory. The Long Beach rapper’s choice of production on Big Fish played well on the outdoor stage, while mixing in fan favorites such as 2015’s “Norf Norf.”

An hour later, Danny Brown took to the same stage debuting a new, much more fresh image. The Detroit rapper was looking sharp with a fresh haircut. Brown played through his hits like “Monopoly,” “Side B (Dope Song,)” “Smoking & Drinking,” and let the crowd sing the hook on “Really Doe,” off his latest release, Atrocity Exhibition, for Warp Records.

One of the most interesting sets during the festival was Arca on the Blue Stage. Blue is a lot smaller than the other two stages and as such is reserved for those who haven’t quite broken through to a much wider audience. While Arca has produced for high profile names like Kanye West and FKA Twigs, his studio albums are much more experimental, ambient and challenging at moments. Except he didn’t play a single original song, instead doing a DJ set going all over the place from Deftones to a lot of trance and Afrobeat. Strange and almost gross-out visuals were provided by Jesse Kanda on a screen behind Arca, and I loved every minute of it.
Closing out Friday night was LCD Soundsystem, and it was so packed it was hard to get anywhere close to the stage, compared to the very much unattended Arca set before across the park. The set was a special moment for festival-goers seeing the band for the first time. Catering to a festival crowd, it was pretty much nothing but Shut Up and Play the Hits, running through “Get Innocuous,” “New York, I Love You, But You’re Bringing Me Down,” making the crowd dance in unison to “Dance Yrself Clean,” as well as recent singles “American Dream” and “Call the Police.” The band ended their set with the very emotional “All My Friends.”

Saturday fared much better, as the wait to get in was a non-issue. Angel Olsen rocked out on the Green Stage with her wonderfully well-dressed backing band in blue suits. She rolled through a lot of upbeat rockers and played the recent hit “Shut Up Kiss Me” off last year’s fantastic My Woman.

Synth wave band Survive took the stage not too long after Madlib provided a more atmospheric and epic mood. Largely known for scoring the opening theme of Netflix's Stranger Things' soundtrack, this Austin-based group conducted a symphony of synths with heavy hitting drums. It was unfortunate they had a daytime slot as their light show would have been way more effective at night.

A Tribe Called Quest ended day two with a fun yet emotional set, as it was their first performance since Phife Dawg passed away. As for stage production, it was a minimal setup especially for a headliner with one of the members taking a shot at LCD Soundsystem saying they didn’t need a disco ball on stage. Tribe’s set was all about the music and how there’s still a lot of chemistry and energy between the remaining members of the legendary rap group.

The last day of the festival started out with high anticipation for The Avalanches who were rumored to play last year but never did. Their groundbreaking sample debut record, Since I Left You, came out in 2000 followed by a 16-year hiatus until we finally got their follow-up, Wildflower. Unfortunately, the band canceled last minute leaving many to wonder if they would ever get a chance to see them again. It was good news for Chicago native Jamila Woods however who got upgraded from the Blue Stage to the main stage playing to a much bigger audience.

Adjacent to the Green Stage electronic musician Nicolas Jaar played on Red. It seemed like an odd choice that he’d get one of the bigger stages over American Football, who were also playing at the same time over on Blue. Jaar’s sound is more current though and setup is more visually impressive. In true Jaar fashion, he tested the crowd’s patience by playing a lot of ambient sounds and getting everything set up before diving into some heavy bass and house beats. Snippets of his work could be heard mixing in and out like the synths on “Swim” or vocals from “Why Didn’t You Save Me.” It was a one man show and he was all over the place bouncing from keyboard to laptop to, yes, even a saxophone at one point. This guy is known for wanting to play five-hour sets, he gets so lost on stage. At one point someone had to tap him on the shoulder to let him know his time was up. Jaar pleaded to play one more but was not allowed.

Turning my attention back to the Green Stage it was time for the final act of the festival, Solange. Her 2016 album, A Seat at the Table, was Pitchfork’s No. 1 record of last year and the first time I really sat down to listen to her. I personally was not familiar with any of the music that was not on that LP but plenty of other people in the audience were. Songs I knew that she played included “Cranes In The Sky,” “Mad,” and “Don’t Touch My Hair.” Her set was very well rehearsed with dancers never missing a step. The backing band sounded sharp and crystal clear and, of course, Solange was charming and drove the crowd wild with her voice. It wasn’t as populated as LCD or Tribe but that could be due to it being the last day and people leaving early. 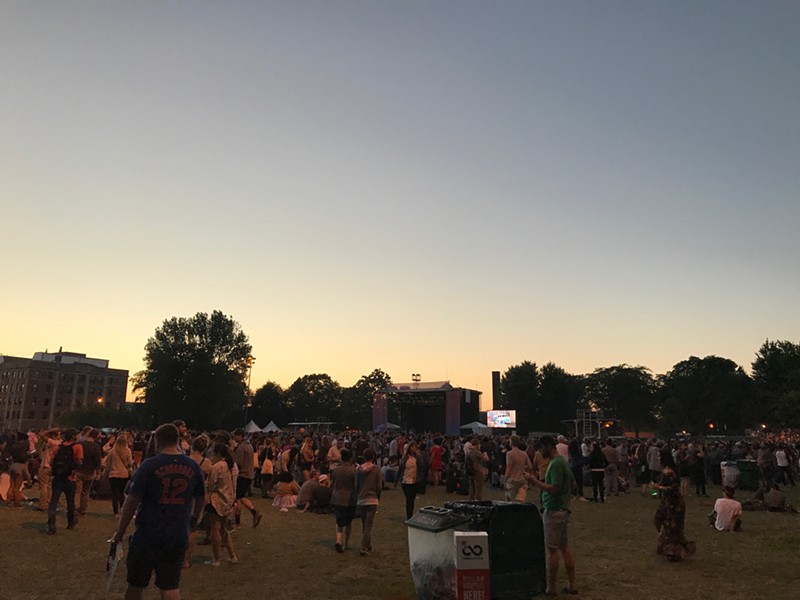 For the price and relative ease of getting to Chicago, Pitchfork Music Festival always keeps me coming back year after year. The lineups are ones that rival much larger festivals like Coachella and Bonnaroo. Plus, it’s nice to have the option of after-shows, since the festival has to end at 10 p.m. each night. It’s one of the few festivals that feels like everyone is there for the same reason — to enjoy the music.