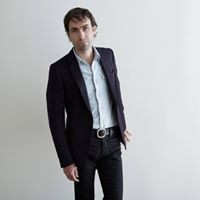 Andrew Bird plays violin like Chuck Berry played guitar and he whistles like Botticelli painted. Since his mid-90s beginnings with the Squirrel Nut Zippers, Bird has carved out an unparalleled territory for himself in the indie music world.

His songs combine whip-smart wordplay, pizzicato plucking and whistling that’s damn near otherworldly for a sound that is completely distinctive.

Bird’s rock-influenced folk with a gloss of wry melancholy have won him the love of a small but loyal following in his 20-plus year career. His creativity has not flagged in those years, nor has his energy. Bird took the stage at Cain Park last night and played all his instruments—violin, guitar, and whistling—with force and precision.

He began his set in the scenic outdoor venue solo with the beautifully eerie violin looping of the kind he showcased on the Fingerlings album series. A three-piece band providing serviceable backup joined him shortly thereafter.

Though his music is complex and demanding—often he matches his whistling perfectly to his complex violin licks—Bird is unmistakably a showman, stomping his feet and cocking his head in a way that seems far more deliberate than “A Nervous Tic Motion of the Head to the Left,” one of the more rocking songs from last night’s lineup. His white blazer, and the sardonic swagger with which he wore it, called to mind a violin-wielding Elvis.

The trappings of Cain Park are mostly natural, but Bird and company added the theatrical flourishes they could. Behind them spun two massive gramophone horns, a callback to his days of playing whacked-out swing anthems with the Bowl of Fire. Dramatic lighting alternately turned the stage shades of icy blue, murderous red, and sickly green. It was the perfect accompaniment for over-the-top numbers like “Why?,” a noir-y barn-burner with slinky guitar, and mournful violin. “How I wish it was your temper you were throwing,” crooned Bird.

One of the highlights came when Bird and the band ditched amps and crowded under a single spotlight for a brief acoustic interlude. The energy from the Americana-style songs was so high that Bird decided spur-of-the-moment, to extend it to include the sweet-and-bitter “Left-Hand Kisses,” with the absence of Fiona Apple, who appears on the record, Bird sang both parts. Another came when Esperenza Spalding, the Grammy-winning opener for the night, joined Bird for a rousing, almost eerie cover of the jazz standard “Caravan.”

The only thing your correspondent would have changed about the night was the venue. That pretty amphitheater was not entirely filled, sound did not travel as well as it could have to the back and large sections of the audience cleared out before the show was over. Should Mr. Bird come to Cleveland again, let’s hope he plays a slightly smaller venue, one where the audience will stay and the walls will reverberate with the sound of whistling.