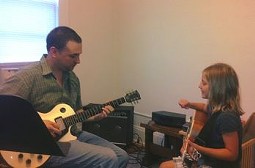 “Ask anyone under 40 what a 'meet-up' is, and they won’t know what you’re talking about,” says local guitar teacher Eric Hankinson one afternoon over coffee at Loop in Tremont.

Hankinson hosts a monthly “meet up” for musicians at Lava Lounge. Dubbed the Cleveland Acoustic Jam Group, the gathering provides players of all different levels the opportunity to improve their skills.

"The jam group represents a unique opportunity for local players to get together in an informal setting and to put their musical imaginations to work," says student Paul Meade. "All are welcome to attend, whether to play or just sit and listen."

Inspired by his father, whom Hankinson describes as “a world-class musician” who toured all over the word and played with people like Brenda Lee, Ronnie Milsap and Johnny Mathis, Hankinson originally took up the ukulele before learning to play guitar and bass a few years later.

“I started listing to Pink Floyd and the Beatles and Rush at age 10,” he says. “When I was 12, I talked my parents into financing some Infinity speakers and I got a CD player in 1986, and I was hooked.”

After dropping out of music school several years ago, Hankinson devoted his time to teaching others how to play the instrument. It took him a few tries before he figured out how to effectively instruct his students. Now, he helps students learn read music so they recognize and understand scales, modes, chords and arpeggios. He teaches a variety of methods, including picking, finger picking, chord/melody playing, bending, sliding and sweep picking.​

“It was terrifying,” he says when asked about what his first lesson was like. “I had no idea what to do. They don’t teach you how to teach. It took me five years to come up with any approach that was effective. When I started, it was like, ‘What bands do you like? What riffs do you like?’ And I would teach those songs. It’s unfortunately what a lot of guitar teachers do their whole life. I don’t do that as much. I want people to learn the theory. There was such demand then. It was 1997 or 1998, right at the end of grunge, and everyone wanted to play guitar.”

Inspired by an article he read that proclaimed Cleveland would undergo a major cultural and economic renaissance, Hankinson moved here in 2009. He initially joined a guitar jam based out of Willoughby, but when that petered out, he figured he’d start his own damn jam session.

He started hosting jams at the now-shuttered-but-soon-to-reopen Tremont bookstore Visible Voice before moving to Mahall's and now Lava Lounge.

“It was disorganized,” he says when asked about the early days of the jams. “Even if you get people who are quite good together, it’s going to be disorganized.”

While the sessions are for participants only, he says it’s not out of the question that he’d one day put on a public performance. Upcoming Lava Lounge sessions will take place on Wednesday, Aug. 9, Wednesday, Sept. 6 and Wednesday, Oct. 11. You can find more info about them at guitarlessonscleveland.com/jam.html.

“If we can get better, we might be able to do [a public performance],” he says. “There’s great music in Cleveland every night, so I don’t think there’s a need for us to perform somewhere. It’s an emergent group. We don’t know what will happen. People are anywhere along the talent continuum. We could have trained singers or the worst karaoke singers you’ve heard in your entire life. It’s more about being a participant.”

He says he appreciates the fact that the Lava Lounge offers good food and drink, creating an environment for creativity to prosper.

“The other thing I like about my group is, knowing musicians, [playing at Lava Lounge] would be a good combination of a jam where you can eat and have libations,” he says. “After all, you can’t have a rum and coke at the library.”