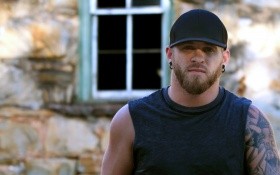 Several years ago as he attempted to launch a career as a country singer and songwriter, Brantley Gilbert tried moving to Nashville. He says he only lasted about a year.

It wasn’t that he didn’t like the Music City. Rather, he felt he needed to stay connected to the people living in his Jefferson, Georgia hometown.

“There’s nothing wrong with Nashville or the people there,” he says via phone. When we spoke to him, he was in the midst of a summer tour, doing the “interstate thing,” as he puts it, to support his latest endeavor, The Devil Don’t Sleep. He performs at Blossom on Friday. “For me personally, I had to be at home. I had to be around the people and places I started writing about. I think it’s also necessary to have them there to hold you accountable. If they’ve been around you your whole life, they’re not scared to tell you what’s up.”

Gilbert, who issued his debut, Modern Day Prodigal Son, in 2009, came into the spotlight after country superstar Jason Aldean turned tunes such as “Dirt Road Anthem,” a song Brantley co-wrote with Colt Ford, and “My Kind of Party,” into chart topping hits.

Gilbert, who writes his own material, says he always wanted to play his own songs. Playing cover tunes, he says, never appealed to him.

“I didn’t really want to learn other people’s songs,” he says. “I don’t know if that was creativity or laziness, but I just felt like I wanted to do my own thing. I wanted to know a couple of chords, so I could start making songs of my own. There’s so many acts that have had an influence on me that I can’t put my finger on one. Every interview I do, I get asked that question in some form. I always say that everything I ever listened to has inspired me in some way. It may have inspired me to not do something remotely close. [In terms of a specific influence], Skynyrd is one of my favorite bands.”

One review of Gilbert'’s debut, A Modern Day Prodigal Son, says the album makes it clear that Gilbert doesn’t play by Nashville’s rules.

“I think that’s probably the case and pretty accurate for me as a whole,” he says when asked if that’s an accurate assessment. “We haven’t ever done that.”

Gilbert would have platinum hits with Halfway to Heaven and Just as I Am. But when it came to writing the tunes for The Devil Don’t Sleep, he says he didn’t think about album sales.

“I say this in all honesty that I’ve never been much of a numbers guy,” he says. “It’s great when they tell me that a record went platinum. The way record sales are right now, no one knows what’s up down or sideways. You take what you can get. Streaming is a thing right now. It’s hard to accurately meter [success]. I’d rather keep up with trying to do what I’ve been doing. If it ain’t broke, don’t fix it. I don’t want to get so caught up in the business aspect that I lose passion for the creative aspect.”

He refers to his new album as “just another chapter” in his life and says producer Dann Huff helped coax the best material from him. "The Weekend" features arena-filling drums and seems tailor-made for rabid sing-alongs, and the guitar riffs in songs such as “You Could be That Girl,” “Tried to Tell Ya” and “It’s About to Get Dirty” sound so gritty, they would fit on most rock albums.

“To be completely honest, we’ve had guitar work on all of our records,” Brantley says. “The guy that’s been doing it, Jess Franklin, is a fricking monster. I love him to death. He lives down in Georgia. He was actually a singer in another band when I met him. I had heard of him. He came out and opened for us one night. I didn’t approach him to hire him right off the bat. I just liked him as a fan, and our relationship developed from there.”

Gilbert'’s fans are so incredibly loyal and passionate that Brantley refers to himself as a “blessed dude” to have such a faithful following.

“I’m forever thankful for that,” he says. “I’ve been writing about things that are close to the chest, and these people are like minded folks. I still live where I grew up. There’s something about that keeps me grounded. We speak the same language.”

Gilbert, who recently celebrated five years of sobriety, says staying clean (at least to a degree) has given him a new sense of clarity.

"I use the term sobriety loosely but not drinking and doing the things I was doing have meant another life entirely," he says. "It’s influenced the way I walk and talk and everything across the board seems like it’s changed for the better. I feel like some of my lines and rhymes are more calculated. I feel like I’m putting songs together better now and singing what I’m thinking better."

While the term "authenticity" gets bandied about often these days, it applies to Gilbert's music if only because he writes his own damn songs. As he sings in the twangy "The Ones That Like Me," a song in which he pronounces his allegiance to his fans, "the ones that need me got me."

"In this day and age, most folks don’t know if you write your own songs," he says. "I don’t think there’s anything wrong with folks who cut outside songs. I think it’s absolutely necessary. For most of the songwriting buddies I got, if it weren’t for that, their songs would never have been heard. For me, [writing original material] is important for me and for the fans as well."