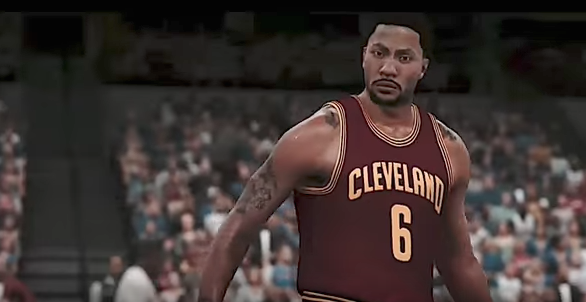 The debate about the impact of video games upon its players is legion and legendary, but the latest cruel trick from a pixelated platform could be convincing Cavs fans that Derrick Rose is the same player he was when he won an MVP nod in Chicago.

In a video posted to YouTube (via Cleveland.com), user DominusIV cut together a pretty great trailer of action from the upcoming NBA 2K18 video game featuring Derrick Rose in a Cavaliers jersey.

But here’s the problem: There is no earthly way Derrick Rose will move like that through an entire NBA season for the Cavs. This looks like something more akin to a highlight reel from his MVP season in 2010-11 with Rose crashing the lane and contorting his body in ways that defy logic and physics.

What should have been the beginning of a skyrocketing career came to crashing halt during the 2012 playoffs when Rose tore his ACL in his left knee. After missing the entire next season, he returned in the fall of 2013. But less than a month into that season, he tore his right meniscus, which sidelined him for the rest of that year.

That’s not to say Rose couldn’t be a valuable role-player in Cleveland. During the 2016-17 season, Rose averaged 18 points, 3.8 rebounds, and 4.4. assists a game for the Knicks.


But we’re not talking about Rose being just a role-player. With Kyrie Irving being pushed out of town after his trade demand, there’s a good chance Rose will start once Kyrie’s gone.

But that’s a huge downgrade at guard for the Cavs, one that’s going to be obvious from the first time Rose fills that spot. Besides not having the same speed he once did, his long-range shots aren’t so hot and his defense is even worse. He’s just not a good fit alongside LeBron.

Plus there’s the bit about Rose tearing his left meniscus in April as the Knicks’ season wound down, requiring yet another knee surgery for Rose (the fourth of his career).

So while it’s fun to think of Rose as the player he was when he was shredding defenses, it’s just that: a fun walk down memory lane that’s about as real as Rose’s ligaments.