Machine Gun Kelly and Cloud Nothings Among the Highlights at Lollapalooza 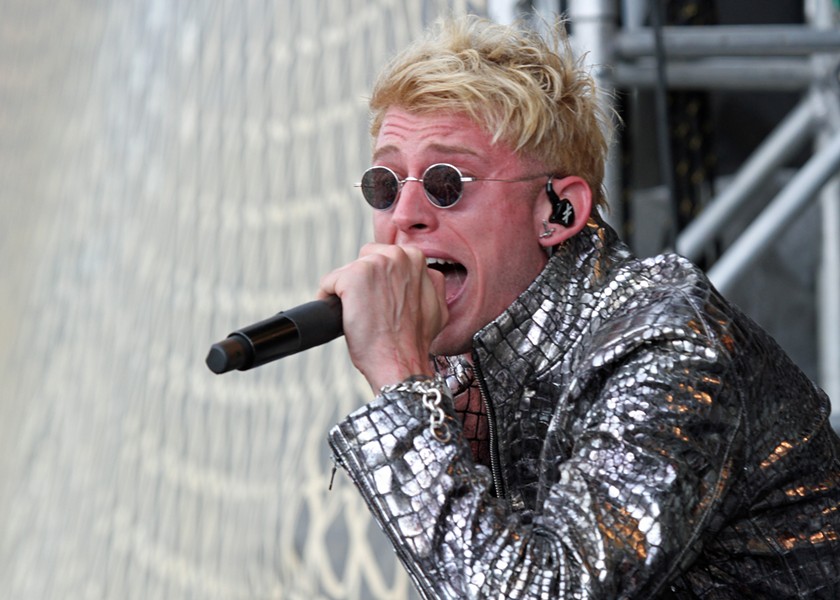 Numerous bands come from around the world to perform at Lollapalooza, the four-day music festival that takes place each year at Chicago’s Grant Park.

Two of this year’s acts — rapper Machine Gun Kelly and indie rockers Cloud Nothings — came from Cleveland. They were among the many highlights at the festival, which concluded yesterday.

You can see a slideshow of photos from the festival here.
MGK, who performed yesterday afternoon in front of an enthusiastic audience of teens and twentysomethings, delivered one of the most aggressive sets of the entire festival. Wearing a silver jacket, skinny black jeans and loafers, MGK clearly enjoyed his first-ever performance at Lolla. “Middle fingers up,” he shouted at the start of a rowdy set that included a tribute to Linkin Park singer Chester Bennington, a friend of his who committed suicide earlier this year. MGK paid tribute to Bennington with a rendition of the Linkin Park tune “Number,” adding that the gray skies provided the right atmosphere for him to sing the track.

Encouraging the teenagers in the crowd to pursue their dreams, he said “I wish the 15-year-old me could have seen the 27-year-old year me and known that I would be playing Lollapalooza.” He added that he was “a Cleveland kid” from a city that was a mere five hour drive away. His rapid-fire raps in tracks such as “Trap Paris” and “Bad Motherfucker” showed off his microphone skills and had a real fierceness to them. He also capably performed “Bad Things,” his big radio hit, by asking the women in the audience to sing the parts that Camila Cabello performs on the studio version. They obliged, and the tune soared.

The wound-up singer even dove into the crowd at one point, rapping all the while as he clutched the microphone while audience members kept him afloat. It was certainly a memorable performance.

Cloud Nothings, who played a rousing mid-afternoon set on Saturday, delivered a set that included songs such as “Modern Act,” a tune that Jayson Gerycz propelled with his heavy drumming. The group’s set careened at a quick pace but hit a little bit of a wall as the band played the set closing “Wasted Days,” a tune which found singer-guitarist Dylan Baldi screaming into the microphone during a meandering jam. Still, the Cleveland band proved itself worthy to be sharing the stage with the other national and international acts that performed during the festival.

One unsuspecting highlight came courtesy of the Killers. Though the band hasn’t released a new studio album in five years (they’ve finally got a new one due out before year’s end), the group showed no signs of rust as it played to a huge crowd. “I can’t believe this many people know the Killers are still around,” said one fan as she gazed out upon the masses gathered at the south end of the park to hear the group headline the festival. Opening with “The Man,” the band rambled through a fast-paced set that included hits such as “Somebody Told Me” and “When You Were Young.” Wearing an embroidered sport coat, singer frontman Brandon Flowers was a real showman as he regularly hopped atop the speaker monitors to dramatically gesture while delivering the band’s distinctive ’80s-inspired rock ’n’ roll. A dazzling light show helped bring the vibrant songs to life.

Singer-pianist Andrew McMahon wins the award for delivering the best feel-good performance of the festival. At his set’s start, McMahon sauntered onto the stage with his band In the Wilderness and then sat at the piano to deliver the poppy “Fire Escape.” He concluded the tune by jumping on the piano’s keyboard, his signature move. His vocals sounded particularly sharp on the a cappella intro to “Walking in My Sleep,” and near the end of the set, he ventured off the stage and crawl into an inflatable raft held up by fans. He enthusiastically thanked the Chicago fans for supporting him for the past 15 years he’s spent coming to the city as a recording artist and spoke about the way music enables people to leave their troubles at the door. It’s hard to dislike a guy that exudes that much positivity.

The guys in the hip-hop group Run the Jewels also spent some of their set encouraging fans to love and respect one another even if “those motherfuckers” in politics can’t abide by those principles. The band’s rappers — Killer Mike and El-P — arrived on stage to the sound of Queen’s “We Are the Champions” blaring on the PA system. The stirring “Nobody Speak” utilized some deft turntable scratches, and, like MGK, the band dedicated one song to Linkin Park’s Bennington. El-P told the audience that suicide could and should be prevented.

The New York-based indie electronic duo Phantogram also turned in a thrilling performance. With the assistance of a live drummer, the two emphasized the aggressive side of songs such as “You Don’t Get Me High” and “Same Old Blues.” Singer-guitarist Josh Carter and singer Sarah Barthel made the most of performing on the large stage and regularly faced off against one another during their high-energy performance.

Unfortunately, singer Lorde, who headlined on Thursday night, had to cut her set short when a thunderstorm forced an evacuation of the park. She commented that storms have seemingly followed her all summer long. “Let’s conjure some spirits,” she told the crowd as she launched into “Tennis Court” and “Magnet.” Wearing a bright red corset along with matching red sweat pants and a pair of white sneakers, Lorde only made it through a handful of songs. Too bad — Lorde seemed primed to put on an intense performance.

While Lorde had a legitimate excuse for cutting her set short, the same can’t be said for Liam Gallagher. Performing in front of a white banner that featured his name in big, bold black letters, Gallagher played only four songs before he stormed off the stage. No big loss — his vocals were off as he mumbled and slurred his way through songs such as “Rock ‘n’ Roll Star” and “Morning Glory.” Gallagher, who came off as all attitude without any aptitude, assembled a terrific, hard rocking band to back him. In fact, when left the stage, the band capably jammed as it awaited his return and only stopped playing when it became apparent he wouldn’t.

Cage the Elephant, a band that seems to get better with each album, played a show-stopping set that included garage rock tunes such as “Ain’t No Rest for the Wicked” and “In One Ear.” Wearing a sparkling dress and fishnets, singer Matt Shultz said he intended to “look pretty” for the Lolla crowd. His animated performance certainly captivated the huge audience that turned out for the performance.

While rapper Wiz Khalifa often yelled more than he rapped, his charisma came across clearly during a rowdy set that featured a cameo from fellow rapper Ty Dolla Sign. Backed by a live band, the tattooed, shirtless Khalifa, who wore a pair of bright white jeans, regularly relied on backing tracks so he could play songs such as “See You Again,” a track that featured vocals from Charlie Puth.

And his vocals sounded like they were pumped through some sort of processor. Still, Khalifa’s feel-good vibe went over well and he urged audience members to treat each other with respect because there are already “too many assholes in the world.”

Hometown hero Chance the Rapper’s headlining show on Saturday night was truly epic. It served as a victory lap of sorts after a remarkable year. Chance, who took the stage about 15 minutes late, began with a video introduction that featured news reports chronicling his recent accomplishments, including a Grammy win earlier this year. “I’m gonna fuck this show up,” he yelled early in his set. Emphasizing the gospel side of his sound, he started with songs such as “Blessings” and “Angels” before dipping into the slow jam “Juke Jam.”

Animated and clearly enthused to be playing before the hometown crowd, Chance used the performance in front of an enormous crowd to show just how far he’s come — only three years ago, he did a set on a side stage in front of a crowd that numbered in the hundreds. Now he’s a bona fide superstar who performed in front of tens of thousands.

Throughout the festival, a theme emerged. Music has the ability to unify, something that’s needed now more than ever since politicians have divided the country and driven a wedge between people. Performer after performer stressed the need for unity and acceptance. Republicans and Democrats might not agree on anything but the various bands playing a variety of different styles of music found plenty of common ground at this year’s festival.