Maggie Rose, Who Opens for Faith Hill and Tim McGraw at the Q, Is One of Nashville's New Voices 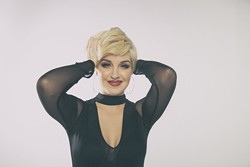 Up-and-coming country singer Maggie Rose got her first gig singing with the B Street Band, a Jersey-based Springsteen tribute act. While she had sung at her church, she hadn’t sung in public prior to joining the group.

“It was my first opportunity to cut my teeth as a performer,” she says via phone from Nashville, when asked about the experience. Now an established solo artist who tours and records, she performs on Thursday, Aug. 17, at the Q where she opens for Tim McGraw and Faith Hill. “I hadn’t sung any originals at all. I wasn’t singing secular music. I was in a different setting with a church vibe. With B Street, thus began my artistic approach. I realized being a singer is just 10 percent of the whole thing. If I hadn’t met that band, I wouldn’t have had aggressively pursued doing this for a living. It made me realize there are other elements to singing.”

After she became accustomed to performing live, she realized she wanted to pursue her musical dreams. She quit school and moved to Nashville.

“At the time, it was a hard decision to make, especially given my upbringing,” she says. “I went to a prep school where everyone went to college. It was deviating from the conventional expectation of graduating. It was hard. I felt like I was an outsider [in Nashville], but one thing that has become clear to me is that I’m okay with being an outsider. My parents are regimented people, so when I made this decision, I had a plan in place and an apartment picked out. If I had just peace-d out with a guitar over my shoulder, they wouldn’t have liked that. I showed them my commitment even though I was only 19.”

Her first release was a remake of the Kings of Leon tune “Use Somebody.” With its acoustic guitars, twangy pedal steel and plaintive vocals, Rose’s rendition of the rock tune comes across as a tender ballad. Rose effectively puts a country spin on the song.

“Higher-ups told me to sing this song and then I could do my originals,” she explains. “It’s an age-old promise. Despite that, I wanted to make the song as much of my own as I could. It was a good initiation as an artist to find your voice and cover a song that’s rising up the charts as you release it. I just didn’t want to lose my [original] voice in the process.”

Rose’s 2013 debut studio album, Cut to Impress, begins with the twangy “Preacher’s Daughter,” a tune that shows off her husky voice.

“It was one of the most intense experiences,” she says of the recording process. “The vocal arrangements alone were difficult. It didn’t happen overnight. It’s your life’s work up to that point. Some songs are a few years old, and some were a few months old. Trying to find a cohesive thread was a fun challenge since it was a bit of a Frankenstein record. I had bits and pieces of it recorded here and there. I don’t know if I’ll ever make a record that way again.”

“At first, I was going to produce it myself,” Rose says of the album. “I had lived with the songs and he gave me a great perspective and refreshed the songs. I did it independently and not because someone told me I had to put something out. I just felt like sharing it.”

The snappy title track features a bit of keyboard and punchy vocals as Rose sings about handling reality with a whiskey chaser. The song chronicles the struggle of trying to stay true to lofty aspirations and ambitions.

“Candidly, I’m in my first year of marriage and I’ve had major label deals and indie deals and it’s all about that,” she says. “Being independent comes with its struggles and all the grit and glamor of doing this on your own. It’s an empowering stance. The indie vibe is cool, and the people grinding it out are my rock stars. It was a fun, easy song to write.”

Rose also created a bit of noise with the sultry music video for “Body on Fire.” She sings the song while wearing a nightgown. She also recruited a couple of friends to provocatively dance with one another.

“The bed is actually my blow-up mattress from my house,” she says. “We recorded the video at a studio where I recorded for the album and converted it into this fantasy Bridge to Paradise jungle bedroom. We did it for next to nothing and used furnishings from my stylist’s house and furniture from her house and mine.”

NPR recently named Rose “what’s next in Nashville” and the Washington Post called her “one of country music’s rising storytellers” That’s high praise at a time when the “bros” playing country music tend to get most of the attention.

“There’s so many talented women in country,” says Rose, who cites country-ish singer-songwriters such as Brandy Clark and Margo Price as inspirations. “But it’s shifting in terms of the aspirations of what these women want. The end all isn’t getting your song to No. 1 on radio anymore. That’s cool and trust me I would be the first one to be celebrating. Our focus has shifted to what we consider to be accomplishments. It’s not as weighted to what is on the radio. Bro Country is still celebrated but we can look to other things. Country music and country radio are not synonymous. Nashville is evolving.”