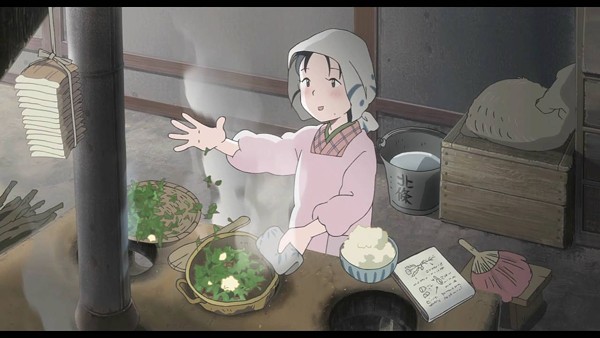 It’s World War II, and the "corner of the world" is Hiroshima. On the 72nd anniversary of the U.S. bombing the city in 1945, the animated film, In This Corner of the World, recounts the event itself and the conflict leading up to it, primarily through the eyes of a young Japanese housewife.

It opens on Friday at the Capitol Theatre.


The story revolves around Suzu (Rena Nounen), a young woman raised in Hiroshima. She receives a marriage proposal from a man who fell for her after a brief meeting years prior, and accepts; she then moves into his family’s home 15 miles away in Kure.

Suzu must adjust not only to life as Shusaku’s (Yoshimasa Hosoya) new wife, and his family’s daughter-in-law, but to wartime life in general. As the worldwide conflict progresses, and fighting encroaches on their seaside town, Suzu is forced to take on more and more responsibility as her world crumbles around her.

The film begins in 1933, but scrambles to reach 1945 and the nuclear blast that decimated Hiroshima. As a result, though the film is rife with suspense by default, it doesn’t guarantee a compelling story; as with any piece of historical fiction, that job belongs to the characters. In this case, it’s not an issue; Corner of the World presents a colorful cast of players that implore you to care and keep watching, even when the film’s many Suzu-learning-housework montages drag on for too long.

Suzu, as the main character, shoulders much of this responsibility. It’s equal parts inspiring and heartbreaking to watch the avid daydreamer strive to be the best housewife and wartime citizen possible, despite being essentially forced into marriage with Shusaku. Her relationship with her new husband and his young sister are both effective, in particular; Suzu’s heart might not belong completely to Shusaku, who's effectively a stranger, but the war provides entirely unique circumstances for their tentative bond. And Suzu, despite being grown and married, is almost as innocent and sheltered as her young sister-in-law when she first arrives in Kure, making their relationship even more touching.

In This Corner of the World is entirely different from Dunkirk, the other universally-praised World War II flick released this summer. But both films achieve the difficult task of condensing vast, almost incomprehensible worldwide conflict into two-hour features by honing in on a handful of individuals and their limited but valuable worldviews.

No fighting or planning from military points of view is showcased in this film, just what Suzu and her civilian in-laws experience. But this makes the story more chilling; no outside perspectives are needed. The zoomed-in focus makes everything the family endures, from humorous food-rationing antics to genuine tragedy, that much more intimate and heart-wrenching.

The film is slow and deliberate, sometimes crawling toward its inevitable climax. But it works in Corner of the World’s favor; the war didn’t happen overnight, but it did only last six years, and writer-director Sunao Katabucci’s timeline balances this well.

This film proves that 70-plus years later the bombing of Hiroshima still holds countless stories that deserve to be told, real or fictionalized. We already know what happened in Japan in 1945, but the In This Corner of the World offers an entirely unique take on the catastrophe; it's an enchanting film whose charm and devastation both creep up on you, in a good way.

Film In This Corner of the World film