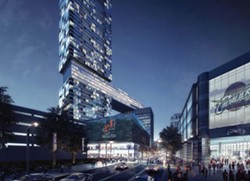 The Cleveland Metropolitan School District's board members were set to vote on the nuCLEus TIF deal this evening. That agenda item has been indefinitely postponed.

Recall that City Council, which has the final say on this deal, has not yet spent one second debating the nuCLEus plan in formal committee. As the city and county eventually take a closer look at the deal, school board members say they want a seat at the table; casting a vote would pretty much take them out of the upcoming proceedings.

“CMSD has learned that a meeting is currently being scheduled between City and County officials and Stark Enterprises to ensure all parties have a clear understanding of the funding of the complete nuCLEus project,” according to the board's press release. We'll keep an eye on future public meeting and votes.